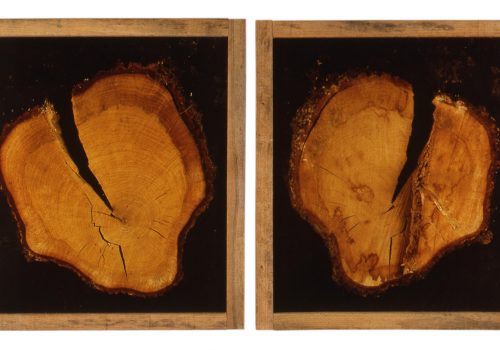 A fine practitioner of still life, Pascal Kern used photography to sublimate the art of molding. Les Douches Gallery in Paris hosts the first exhibition of his work since his death in 2007.

Take a walnut and split it in half. You will get the image of a mold: the shell that surrounds the kernel. As it happens, it is views of halved nuts that catch the eye of the visitor to the exhibition. The series encapsulates Pascal Kern’s obsession that is magnified by photography. It’s an obsession with molding and its duality, between nature and culture, between what emerges in its pure form in the world and what has been fashioned by human hands.

Thus the artist finds objects with astonishing forms: pieces of industrial molds designed to manufacture other objects. He photographs them by placing them beforehand in a carefully chosen setting, a meticulously prepared mise-en-scène: dark, neutral background; bright lighting. Next he takes a frontal image of the object; then he turns it around, opens it, and takes another photograph. The result is surprising diptychs and triptychs that make us wonder what the object might have been and what its purpose could be.

The industrial molds correspond to another series. Pascal Kern grows vegetables—cucurbits, a family that includes squash, such as red kuri squash, for example. Once the vegetable is ripe, the artist inserts it into a plaster mold of his own making. Next he takes out the plaster-cast vegetable and adds colored paint into the hollow of the mold in order to enhance the imprint. He thus obtains a bluish or yellowish bowl, often of the same color as the industrial objects he photographed earlier.

Pascal Kern is so preoccupied with color that he does Cibachrome prints, that is prints that bring out the color hues so well that we get the impression that the image is glowing with an inner light, that there is no need for additional lighting.

To this long process, Pascal Kern adds the art of framing. He works very scrupulously, creating his own frames. They are made of wood when they’re meant for the photographs in the series Nature: those of the vegetables and their plaster molds. When they’re meant for metal or copper objects, they are metal. The frame thus participates in the elegance of sculptural photography where the artist makes a point of doing everything by himself.

Like a sculptor who knows how to exploit space, Pascal Kerns deploys his invention beyond emptiness by questioning our relationship to matter. By way of his interest in molds, he examines the creative gesture. Is it the mold that imitates nature or is it nature that takes its cue from the mold? Pascal Kern, who trained as an engraver, responds by sublimating the tools of the trade. Thus, at Les Douches Gallery, there is a diptych that doesn’t quite fit with the rest of the exhibition. It shows wooden clothes clips strung on a thread. These clothes clips are those the artist used for hanging his engravings. Here again, he magnifies a working implement and generates a mise-en-abîme of the gesture of the artist, and more generally of the gesture of any worker, whether physical or intellectual.