PART in Rimini : where gifts constitute a Museum of contemporary art (Emilia-Romagna Photo Valley: episode ONE) 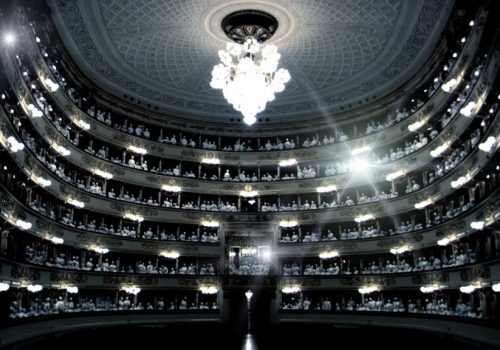 Art and social commitment, tradition and contemporary, public and private partnership. These are the elements that provide the uniqueness of the PART – Palazzi dell’Arte Rimini, the new museum that joins in a single project the redevelopment for cultural purposes of two medieval buildings in the very heart of the city and the permanent placement of the collection of contemporary artworks donated to the San Patrignano Foundation by collectors, gallery owners and artists (including Damien Hirst, Emilio Isgrò, Julian Schnabel, to name a few).

The contemporary art collection at PART is the constantly growing major Italian endowment initiative and it is intended for the future of the Comunità di San Patrignano, that since 1978 has been committing to “provide a second opportunity to people who stumbled” into the labyrinth of life and are fighting to douse addictions. A second life (the umpteenth over the centuries, we would say) is offered to the imposing 13th century Palazzo dell’Arengo and the 14th century Palazzo del Podestà as well. Indeed, as Mayor of Rimini Andrea Gnassi pointed out, “PART is the space of the impossible that is made possible: past, present and future without interruption, towards a new direction”, for the town, best known for its golden beaches, includes “marvellous, historic buildings of the great history of Italy”. The Tiberius Bridge, for instance, or the Arch of Augustus, interesting testimonies of the Roman period, the Malatesta Temple, a Reinassance masterpiece, or the Sismondo Castle, that is going to host the international museum dedicated to the film director Federico Fellini.

Thus, the medieval architectures of the palaces are in dialogue with the contemporary works inside them, activating new senses of meaning, offering unexpected unseen before points of view. The works on show include – that’s quite interesting – a significant number of photographic images (or works closely related to photography), like the ones by Vanessa Beecroft or by Michelangelo Pistoletto, with an emblematic self-portrait.

Letizia Moratti, co-founder of the San Patrignano Foundation, comments: “It’s a synergic path that through culture and art, feeds a new model of collaboration between the public and private sectors, that promotes culture, economic development, urban regeneration in the name of innovation, social responsibility and participation”. President of the Emilia-Romagna Region, Stefano Bonaccini, during the opening, adds: “Every cultural project is an added value for the community, but also an investment that creates employment and business opportunities. As a Region, we have tripled our funding for culture and we will continue to do so, all the more so in the face of the pandemic through which we are living”. Clarice Pecori Giraldi, responsible for the curatorial coordination of the San Patrignano Collection, adds that: “contemporary art is also a significant contributor to artistic heritage. Artworks constitute a financial as well as a cultural treasure, thus blending the cultural and social value of the project”.

The Last Judgment by Giovanni da Rimini, a vast fresco dating back to the 14th century, is also on display in the spaces of PART, redesigned by the architectural studio led by Luca Cipelletti, and enriched by specifically art created for this place, like the permanent wall drawing by David Tremlett, together with the participants to the San Patrignano workshops. In the belief that “Art is community”.

Rimini, with the PART, is one of the main stages in our tour of the “Photographic Valley” in the Emilia-Romagna Region.