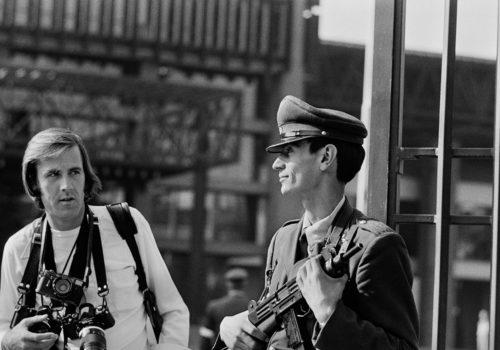 The Nederlands Fotomuseum in Rotterdam is presenting a wonderful exhibition which unfortunately ends on May 8. “Starring Chas Gerretsen” is the first retrospective of Dutch photographer Chas Gerretsen. (Robert Capa Gold Medal winner of 1973).
Forgotten today, he was alternately a photojournalist and still photographer.
Thanks to Monika Pfandzelter for providing us with all this material.

Dutch photographer Chas Gerretsen is being rediscovered, 30 years after he gave up photography

Is there such a thing as objective journalism? Are photographers allowed to take a stand on a topic? Can a photograph be guilty of something? These important themes are reflected in the oeuvre of the exceptionally versatile photographer Chas Gerretsen. According to Chas, “most photojournalists subconsciously, censor themselves; since they have no influence, in which pictures get published. It’s difficult for them to show a contrary view, or to veer from present day popular opinion, if they want to continue to be published. As a freelance photojournalist, I was not controlled, but already in the late sixties, my images were.”

Till May 8th, the Nederlands Fotomuseum in Rotterdam presents a selection of over 200 photographs in the retrospective exhibition ’Starring Chas Gerretsen’. Guest curator Iris Sikking says: “This exhibition takes the audiences and readers to the battlefields of South-East Asia, Vietnam and Cambodia, the streets of Santiago de Chile, the set of ‘Apocalypse Now’ and onto film-sets and homes of Hollywood stars in the seventies and eighties. These four separate chapters in Chas’s work and life seem at first sight to have little connection with each other. But together they constitute the extraordinary foundations of Chas’s photographic oeuvre and life.”

Gerretsen grew up in Holland, but lived outside of Europe for most of his life. Driven by an unquenchable curiosity he left Europe, immediately after his 18th birthday, and went in 1961 to Australia; he hasn’t stopped traveling since. Chas started photographing to show his family how he was doing: the people he met, places and situations he experienced.

He became a professional photographer during the Tet-offensive, in the beginning of 1968, after he had walked into Vietnam: with 75 cents and a Minox-B miniature camera in his pocket. Chas started out as a combat cameraman for UPI-TN. Not liking to be told where and what to film, he quit UPI-TN and became a freelance camera man. Shortly thereafter, he got his first still camera: trading a Nikon F camera, with a 105mm lens, with his friend, the American war photographer Dana Stone. Gerretsen sold his first images to UPI for $5 per negative – no photo credit. (In 2013 this camera with ‘Dana Stone’ scratched into the body, was auctioned at WestLicht in Vienna for a hammer-price of 14.400 Euro. Dana Stone had been captured in Cambodia with Sean Flynn in May 1970.)

Not only did Gerretsen cover the war in Vietnam and Cambodia but also a few years later the military coup d’état in Chile, on 11. September 1973. For his coverage of the latter, Gerretsen received ‘The Robert Capa Gold Medal’ award for “best published photographic reporting from abroad requiring exceptional courage and enterprise”. In a short time from 1967 to 1975 Chas Gerretsen changed his photographic career from cameraman to combat photographer, to photojournalist and storyteller. Chas showed the life of ordinary people: schoolkids, market women, rebel soldiers, farmers or politicians in the times of poverty, unrest and conflicts.

From photojournalist to show biz

In 1975 Chas Gerretsen turned his back on the real battle fields; he went to work in Hollywood.

Only a year later, Gerretsen was asked by Francis Ford Coppola to work on the now epic Vietnam war film: ‘Apocalypse Now’. Hollywood style, Coppola wanted a combat photographer for a combat movie: Gerretsen’s photographic career had come full circle, from ‘Real to Reel’. The pictures taken in the six months on the set of Francis Ford Coppola’s master piece demonstrate that the barrier between real wars and fake ones is sometimes hard to discern.

During the following 12 years Chas founded his own photo agency, Mega Production Inc., started a successful photo-studio and also became a filmmaker. Chas had over 500 celebrities in front of his lens, musicians, actors, producers and sportspersons.

In 2019, KINO-Rotterdam and the NFM produced a 32 minutes long video documentary: ‘Dutch Angle: Chas Gerretsen & Apocalypse Now’. The mini-doc was a great success in Bologna, at the film festival ‘Il Cinema Ritrovato 2019‘ and Francis Ford Coppola included the documentary in his ‘Apocalypse Now: The Final Cut’ Blu-Ray-disk-set.

Why was this photo exhibition called ‘Starring Chas Gerretsen’?

The NFM invited independent curator Iris Sikking, who entwined Chas’s life with his photographic work. In the past only the images of the coup d’état in Chile were shown in exhibitions around the world. During his carrier Gerretsen was mostly known for this coverage of the military coup in Chile; recently fans of the Francis Ford Coppola war film ‘Apocalypse Now’ discovered Chas for the images he took on the filmset of this epic Vietnam-war movie in 1976.

The retrospective at the museum in Rotterdam is Gerretsen’s first solo-show, highlighting his evolution as photographer and artist. Visitors have the chance to get to know the entire scope of Gerretsen’s photography. The exhibition and accompanying publication reflect on an amazing and unpredictable career, both offer a compelling image of Gerretsen. Iris Sikking explains: “Gerretsen’s episodic career is perhaps best summed up as a life lived as a series of separate scenes. The link between them is Chas himself, which is why I have given him the starring role in the exhibition and the associated book. Not to place him on a pedestal, but to give him the recognition that his photography so richly deserves.”

Visitors of the Fotomuseum in Rotterdam can follow the photojournalist from the warzones of South-East Asia on to South-America. A large part of the exhibition deals with the social unrest and troubles of this continent. From the beginning of 1973 Gerretsen covered the demonstrations, riots and problems of Chile, led by president Salvador Allende. On September 11, 1973 Chas covered together with his friend Sylvain Julienne the coup d’état. Julienne and Gerretsen had just started a lifelong friendship. Chas worked at the time with the French photo agency Gamma and Sylvain was with the competing agency, Sygma.

Chas says of himself: “I was led by curiosity. Was life really as depicted in Hollywood movies, was war as glamorous as in the films of my youth? I wanted to show what I saw; simply, what was happening in the world.” True photojournalism, which has now become true art.

The NFM has extended Chas’s retrospective due to its great success for two more weeks; it will now end, after seven months, on the 8th of May 2022.

Coinciding with the exhibition three books have been published in 2021:

“Apocalypse Now, The Lost Photo Archive, by Chas Gerretsen”
256-page, hardcover, photobook. This book is filled to the brim with iconic photos from the filmset in the Philippines, 1976. Published 2021 by Prestel Verlag, Munich/ Penguin/ Random House, N.Y., and designed by Sybren Kuiper (-SYB-). ISBN: 978-3-7913-8808-3
https://www.nederlandsfotomuseum.nl/en/webshop/apocalypse-now-the-lost-photo-archive-chas-gerretsen/

The photographers edition of “The Lost Photo Archive”
is limited to 30 copies in a linen-covered clamshell case; it contains three signed prints from the set of ‘Apocalypse Now,’ taken 1976 in the Philippines.
Available at the Nederlands Fotomuseum for the duration of the exhibition at: 495€.
https://www.nederlandsfotomuseum.nl/en/webshop/apocalypse-now-the-lost-photo-archive-limited-edition-chas-gerretsen/