My beautiful encounters at Photo Saint-Germain By Agnès Vergez 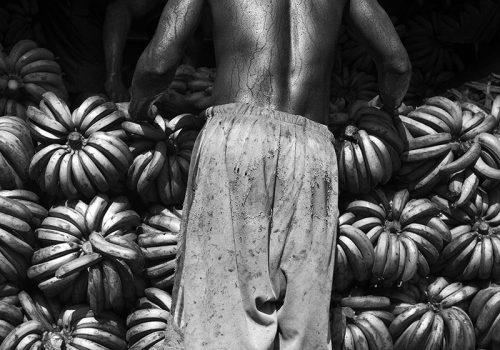 If there was only one left … It would be this one. Pierrot Men, whom I admit to discovering. At the bar of the Palette, rue de Seine on this sunny autumn morning, the photographer, just landed, a little misty, from the plane that brings him late from his native Madagascar, takes time for a coffee and a croissant with the few journalists present. Almost too discreet, or too humble, the artist is not talkative but together we discover the catalog of his exhibition, just finished printing.

Photos in support he begins to tell his wanderings in the city, on the beaches and dunes, without any goal, but always with his Leica on hand or sometimes held at arm’s length, the eye on the look out for a scene, a look, a light. He photographs all the time, while walking or even while driving and is astonished when one speaks to him of correct framing. Because for him, the framing is innate, he sees it, does not seek it. A legacy, no doubt, of his past as a painter.

On his I Phone, he shows us a photo, taken from his car, of a Malagasy woman sleeping in a field in the shade of a tree, on the path that led him to the airport the day before. The picture is beautiful and pure. He shows us how to modify the framing transforms the effect. He seems still surprised by the magic of the medium.

His work is a documentary poem highlighted by the equally charming Malatiana Robinson and Jean-Marc Tingaud at the Lee Gallery.

A little further down the rue de Seine, it is another cottony softness that catches the eye in the window of the Librairie des Alpes. It exhibits “Ciels de Montagne”, including a delicious series of vintage prints of mountaineers, skiers and snowy landscapes. Pushing the door of this shop as specialized as encumbered is a beautiful invitation to an alpine trip.

Another atmosphere in the Czech center of Paris is Vladimir Birgus’ heavy and overwhelming view of Eastern Europe in the 1970s and 1980s, commemorating the 30th anniversary of the fall of the Berlin wall. The exhibition Autant si peu strikes by its empty spaces and gray, by the sadness and loneliness of his characters. A testimony as weighty as it is effective.

Finally, discover the moving trace of Emile Zola photographer at Meyer Gallery. A window on the private man, his naturalist gaze on the cities around him, his sharpened and tender eyes on his children. Zola uses the possibilities offered by photography at an early stage, with technique and talent, to strive for objectivity: “In my opinion, you can not say that you have seen something if you have not taken a photograph of it”. Emile Zola

Information and program on www.photosaintgermain.com

Von Lintel Gallery : Osceola Refetoff : If These Walls Could Talk