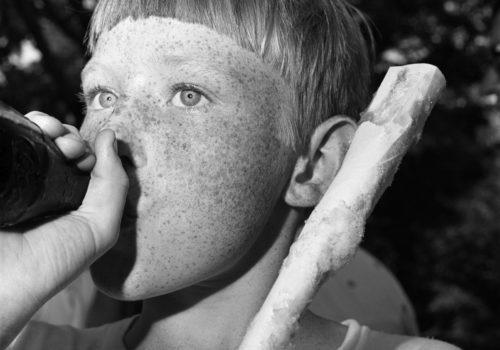 For its second exhibition at Paris Photo, the MUUS Collection showcases the early work of Rosalind Fox Solomon.

For the past fifty years, Rosalind Fox Solomon (born 1930) has narrated, in vivid portraits, the lives of the communities she captured around the world. Always aiming to go beyond stereotypes, she has born witness to major events of the twentieth century: segregation in the American South, post-war Cambodia, the apartheid in South Africa, the Irish unrest between Protestants and Catholics, as well as the ravages of AIDS in the 1980’s, photographing all with sensitivity and frankness.

Following the presentation of collages by Deborah Turbeville in 2021, the MUUS Collection’s second exhibition at Paris Photo presents a series of Rosalind Fox Solomon’s early work, shown to the public for the first time in its most complete form.

Rosalind Fox Solomon: The Early Work, curated by Nathalie Herschdorfer, director of Photo Elysée, brings together images taken by the artist between 1972 and 1976 at the Scottsboro Flea Market in Alabama, in which her acute sense of portraiture is already shining through.

Initially focusing on broken dolls, Rosalind Fox Solomon soon turned her lens to the vendors and finally to the market-goers. These portraits reveal the photographer’s humanist gaze on the community, whose expressions she captured masterfully, notably through tight framing and off kilter viewpoints. Her interest in certain eccentricities is also clear, reminiscent of Lisette Model, who became her mentor after being presented with Solomon’s images.

Some of the pictures cast a shadow over this ingenuous view of a Sunday flea market, revealing Rosalind Fox Solomon’s sharp eye, catching cracks in the American veneer: a man wearing a Coca-Cola T-shirt posing in front of a tank, a woman proudly holding a gun bigger than her, a stand where an American flag stands alongside a Nazi flag, two men each carrying a gun and posing next to a Confederate flag, and beyond.

Sometimes touching, sometimes disturbing, this series is a candid portrait of an American South plagued by racism, in which Rosalind Fox Solomon formulates a humanist commitment that has remained with her throughout her career.

The MUUS Collection believes in the unique power of photography as an inimitable touchstone of collective cultural memory. As a functional archive, MUUS builds, preserves, studies, and shares its collections of photography to generate new scholarship and understanding, while instigating interesting and relevant dialogues within the wider photography community. MUUS preserves and promotes invaluable artifacts for generations to come and is committed to keeping photographic memory alive through exhibitions, donations, and scholarship.