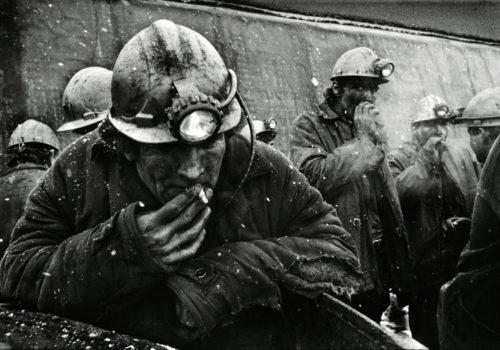 The MUUS Collection is pleased to partner with Ki Smith Gallery to present an online exhibition of works by award-winning documentary photographer Shepard Sherbell from his series Soviets, capturing the dissolution of the Soviet empire in the early 1990’s.

Thirty years later, Sherbell’s photographs documenting the daily lives of residents serve as a poignant reminder of the destructive toll of unconstrained state power, and the extraordinary human ability to persevere. As the cyclical nature of history repeats, and Russia continues its attack on Ukraine, The MUUS Collection is committing an initial $5,000 donation as well as all net profits from the sale of Sherbell’s work to The Kyiv Independent to support the integral practice of photojournalism and independent reporting, particularly in times of active conflict.

The 50 photographs being presented offer a glimpse at life inside the former superpower, and the hardships imposed upon those who inhabited it. Despite it being an unvarnished documentary, Sherbell masterfully captured moments of beauty and joy, as well as moments of intense sorrow and pain. This newly presented selection is both an important historic record, as well as a timeless accounting of resilience and fortitude in the face of an ever-changing world.

About the MUUS Collection

The MUUS Collection believes in the unique power of photography as an inimitable touchstone of collective cultural memory. As a functional archive, MUUS builds, preserves, studies, and shares its collections of photography to generate new scholarship and understanding, while instigating interesting and relevant dialogues within the wider photography community. MUUS preserves and promotes invaluable artifacts for generations to come and is committed to keeping photographic memory alive through exhibitions, donations, and scholarship.

Shepard Sherbell (1944-2018) was a documentary photographer and photojournalist whose work covering the collapse of the Soviet Union culminated in the award-winning book Soviets: Pictures from the End of the USSR.

Born in Brooklyn, NY, Sherbell began his career as an editor for The East Side Review — A Magazine of Contemporary Culture while he was a student at Columbia University. Through the Review, Sherbell became enmeshed with Beat Generation authors like Allen Ginsberg, Norman Mailer, and Gary Snyder; these collaborations led to Sherbell’s involvement with the counterculture movement in New York and in London, where he took up photography, capturing some of the most influential musical groups of the generation from the Rolling Stones and the Beatles to Jimi Hendrix and Miles Davis.

After a decade photographing literary icons and rockstars, Sherbell relocated to Washington D.C. and focused his lens on the political world, covering conflict zones and major historic events, from the Nicaraguan Revolution to the Soviet withdrawal from Afghanistan. In the early 1990s, on assignment for the German weekly Der Spiegel, Sherbell moved to the USSR, extensively photographing the dissolution of the Soviet Union and its aftermath. The series captured the lives and realities of everyday people inhabiting the former superpower, resulting in images that range from poignant to humorous, and agonizing to hopeful; in 2001, he published Soviets: Pictures from the End of the USSR with more than 200 of these black-and-white images. In the introduction to Soviets, author Serge Schmemann wrote: “I know that time spent in… that black-and-white world that Shepard Sherbell has captured will stay with me forever. It is where I learned about the avarice and cruelty of unconstrained state power, and it iswhere I discovered the enormous capacity of the human spirit to persevere.” Today, Soviets remains an unparalleled documentary of the fall of an empire.

Sherbell received numerous awards throughout his career for his photo essays, coverage of conflict zones, press photography, as well as an award for Best Photography Book for Soviets. Sherbell died in 2018 in his native New York.