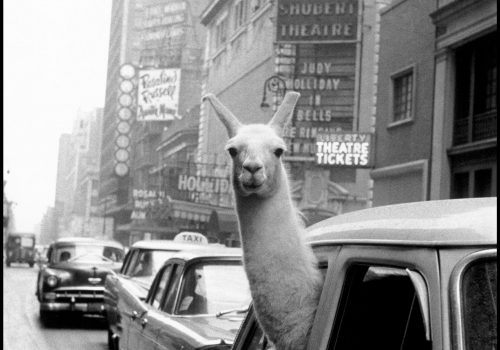 A quite interesting exhibition for a quite interesting photographer, in a particular venue like Milan’s Museo Diocesano. INGE MORATH. La vita. La fotografia (INGE MORATH. Her Life and Photographs) is on stage with 150 original documents and images, that tell of her story, both the human and the professional one. She was the first woman who joined Magnum Photos as a photographer in 1953.

Framed in one of the most ancient monumental complexes in Milan, the exhibition dedicated to Inge Morath (Graz 1923 – New York 2002) redraws her professional and private life, since the beginning alongside Ernst Haas and Henri Cartier-Bresson and her collaboration with magazines like LIFE, Paris Match, Saturday Evening Post and Vogue.

The show presents her travel reportages, that she used to plan with the greatest (and almost maniacal) care, studying the language and the culture of each region she was going to, like an ethnographer. By the way, Morath studied languages in Berlin and became a translator, then a journalist. All her life, Morath remained a diarist, with a dual gift: for pictures and words as well.

On stage, some of her most well-known reportages, like the one on Venice (1953), when she portrayed people in their everyday dimension, according to the photographic tradition of Magnum photos Morath wrote: “Photography is essentially a personal matter: the search for an inner truth”. Inge Morath’s itinerary continues to Spain. She visited this country many times: she had been there since 1954, when she was commissioned to reproduce some paintings for the French art magazine L’Œil and to portray Pablo Picasso’s sister, Lola. Then there are sections on her works dealing with some of the Communist countries, and Austria, The United Kingdom and Paris. Inge Morath had the dream of travelling to Russia: in her first journey to the country, in 1965, she was with her husband, Arthur Miller, the then president of the PEN club, a worldwide association of writers. They managed to meet Russian artists and intellectuals and an extensive photographic work stemmed from that voyage. Other sections of the exhibition include her reportages in Iran and New York as well as the portraits she shot throughout her career. Some of her most important work consists of portraits, of passers-by as well as celebrities, like Igor Stravinsky, Alberto Giacometti, Pablo Picasso, Jean Arp or Audrey Hepburn. In any case, she was interested into who they were as a human being. Her photographic style has its roots in the humanistic ideals resulting from the Second World War as well as in the photograph of the decisive moment, as Cartier-Bresson called it.

The exhibition, curated by Brigitte Blüml – Kaindl, Kurt Kaindl and Marco Minuz, is accompanied by a publication published by Silvana Editoriale and is part of the Milano PhotoFestival 15TH, the annual event that gathers some 140 exhibitions within Milan and some nearby towns, and of the cultural programs Aria di Cultura and I talenti delle donne, coordinated by Comune di Milano.