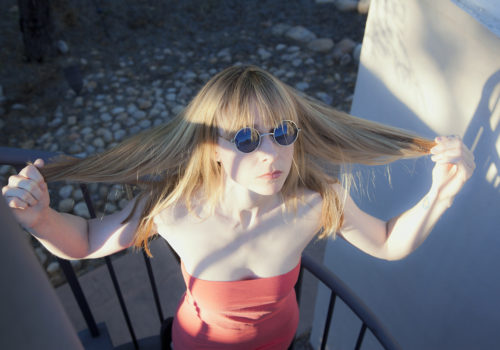 When one thinks of artists and their muses Picasso and Dora Maar come immediately to mind, as do Man Ray and Lee Miller, Edward Weston and Charis Wilson, and Harry and Eleanor Callahan. These great artists focused on flesh, form, and beauty, while today our visual concerns have shifted to narrative: the ability to tell a story in a single picture.

Ronn Spencer began photographing Blake Hines twenty years ago just as they were starting their odyssey as life partners and co-conspirators. Quickly, every aspect of these pictures – from fantasy to wardrobe to props and locations – became an essential component of their lives together, plotting and shooting, both photographs and guns.

Their relationship began in Tucson where they opened Sole Studio – with Ronn as the graphic designer with a rock and roll reputation and Blake as an early practitioner of digital retouching who soon became sought after on both coasts. But mostly they spent their private moments together creating narrative pictures of Blake.

Over time Tucson began to lose its historic Western flavor as real estate development incrementally eradicated the city’s ramshackle charm. Determined to escape the flowing concrete, they found a new home in Santa Fe. For their last drive out of town, Ronn designed a special getaway bumper sticker: Tucson: A Warmer Place To Watch Television.

Both are graduates of the Rhode Island School of Design, thirty-one years apart. Ronn later studied with Ray K. Metzker and Beaumont Newhall but was drawn to LA where he became ensconced in the popular music underground. He designed album covers, promotional materials and shot photographs for the Sex Pistols, Talking Heads, Buddy Guy, the Angry Samoans as well as the Velvet Underground, and Marshall Crenshaw. In addition, he was the producer and co-host (with rock writer, Gene Sculatti) of the controversial cult radio show, The Cool and The Crazy (1984-1988) on NPR affiliate KCRW in Los Angeles.

Once in Santa Fe Blake became the Director of two art fairs: Objects of Art Santa Fe and the Antique American Indian Art Show. Later she befriended Baron Wolman, often regarded as the greatest of the great rock and roll photographers. She became his model, assistant, and, crucially, part of the team responsible for his archiving work. Blake and her associate, Dianne Duenzl, ultimately finalized the Baron Wolman Archive and placed it with the Rock and Roll Hall of Fame.

When R&B began making pictures, they agreed to quit after five years. But they were having too much fun. “Why exactly are we stopping?” asked Ronn. So, they kept on going, literally going to location after location, conjuring up fresh narratives to keep the party rolling.