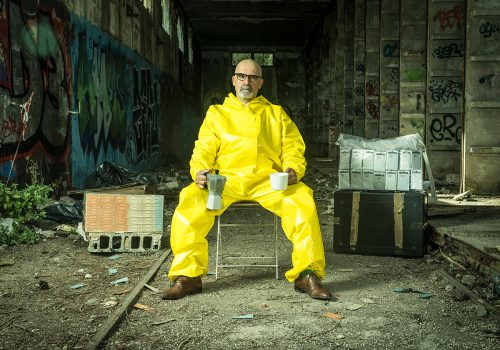 This exhibition is a nostalgic wonder. The photos are by Philippe du Crest, the text by the gallery owner who presents them: Nathalie Béreau.

In 1933, Alfonso Bialetti invented the Moka Express: from this intuition comes the story of Bialetti, who knew how to transform the art of making coffee in a simple and natural gesture until it became an essential ritual in every Italian home.

Photographer Philippe du Crest remembered this gesture and its consequences – democratization of coffee by entering the family sphere, as in a coffee shop -, and was inspired by it for his new series of photographs started in 2015. Then creating the character of Moka, he made a substantial set of photographs, mainly self-portraits featuring him with a coffee maker.

This emblematic character of Moka is opposed to wild capitalism, to all-out consumption, to the waste created by the use of capsules, for example, all in compositions which revisit with humor the myths, history, advertising, news items, classical painting and photography.

While being lucid about economic models to be reconsidered, social or cultural models to be reinvented, the result is intended to be funny, fanciful and witty.

Le Radeau de la Merduse will take us on a journey to explore time, history, art, advertising image, politics, …, to arrive to a new world!

To dissect the Moka coffee maker (Mise à nu) is to recreate a classic still life or how to think about the object, its setting in the space of the blank page, the status of the image today. Any image can therefore be interpreted, analyzed, revisited, deconstructed and then reconstructed in a reflection on our current relationship to it.

“In reference to” (Botticelli, Serrano, etc.) could be “In homage to”, but is above all a nod to works known to all or for some truly rooted in our collective imagination, for others finally , reserved to art connoisseurs. But in each case, these reference images have marked the spirits, have been controversial to the point of creating discussion. Just like the photographic process *, they have imprinted the meanders of our optic nerve to our brain, to imprint themselves there.

From this observation, the question arises of the use of these quotes.

Philippe du Crest has chosen to divert them, in personal compositions where each staging is made from odds and ends, with pieces of string. The photographer voluntarily uses elements resembling those from which they are inspired (the scotch from the headdress for the lace in The Plougastel virus) but working with an economy of means. There is no question of reproducing. The dummy is visible, the illusion shown, no deception!

We are at the heart of the making of an image.

The aesthetic of Philippe du Crest that we find from one series to another lies in the relevance of his gaze on the Other, on the human, in sober compositions where flourish is not in order. and in a range of colors that over time appear less saturated.

The subject is loud because the photographer does not cheat with his subject, he works on meaning.

The quoted works of art are also an opportunity for the photographer to talk about history (Mokamarat killed by Charlotte Clooney) and revolutions! He also chooses to denounce injustices (Uberprécaire 7 days a week and 24 hours a day), the violence of monsters (Charles Mokanson) with Christic drifts, our shameless consumption (Parlez-vous Mokade, Adopte un Moka). The news is not left out as with the composition Mokonfiné.

The characters staged are either in precise frames which have a correct meaning, or on a neutral background thus bringing them more light (Cocktail Mokatov). So nothing is left to chance or is free. Every detail makes sense, making the composition perfectly coherent.

Philippe du Crest does not stage himself in a principle of self-portrait à la Cindy Sherman who, for her part, physically transforms (costume, make-up, hairstyle), posing the question of the image of women in our society and in art.

He uses his body to denounce not the place of man in society but the action of man on the world, its misdeeds and things. Playing on the distortion of the image thus created, he makes us aware of a reality that needs to be changed.

The title of each photograph completes the composition, playing on words, expressions, the original title. All in a playful spirit claiming an awareness from which results a positioning that can be described as committed. This attitude denotes a certain consistency in the overall approach of Philippe du Crest and his various photographic series produced to date.

* A process for recording, using light and chemicals, the image of an object. In Larousse