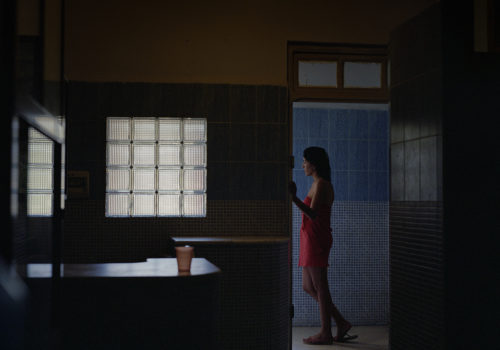 It was long before the debates currently agitating our societies, here and elsewhere: (de) colonization, cultural appropriation, the # MeToo movement… Born in Algeria shortly before independence and raised in France, Farida Hamak did not theorize about any of these questions. : she acted on them. Through photography.

Wait, before continuing: let’s understand what it meant for a woman of Arab origin, torn between two cultures, to want to become a photographer. Paying for this freedom an incredible price. And sealed, with the purchase of her first camera in Singapore 40 years ago, the oath never to betray it. Traveling endlessly – alone – with the animal urge to engulf the world in images. Sometimes backed up by peers, known or not (Cartier Bresson, Martine Franck, etc.), she wrote her story mainly alone.

Her, first, through the intimacy of women in Algeria – when no one was looking at them. Or the journey of her mother from which she extracted a book “My mother, the story of immigration”. Then, the collective one, nourished by the Arab imaginaries of the 1970s: Lebanon, Syria, Palestine, Iraq, Banks of the Jordan,… Its photographic frame concealed another, much  more political. Through photography, Farida recovered the “spoils of war” that Kateb Yacine mentions about him in the French language after colonization. With one watchword, however: aesthetics.

Heiress of immigration, the oppression of women, the French ambivalence towards its bi-nationals, … Everything was too violent. Aesthetic, for Farida, was an act of survival. It is necessary to have known sorrow well to, anywhere, detect the beautiful in spite of the war (she was a reporter), the patriarchy, … To have rubbed shoulders with despair, then the appeasement of an oasis in Bou Saada to achieve such apure image. Such a re-enchantment of light.

Today, this aesthetic universally joins that of masters of painting. The only difference: the gaze comes from within, and is free from all belonging. Because, I tell you, Farida’s first identity is photography.

Exhibition organized by AKAA / Paris in collaboration with MANIFESTA / Lyon.

The Regard Sud gallery will present unpublished works in Algeria.