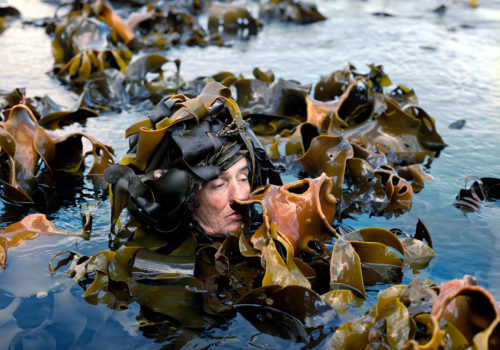 As part of the ‘Fashion and Style in Photography 2021’ biennale, the Multimedia Art Museum, Moscow presents the exhibition ‘Eyes as Big as Plates’. This is the first joint project by the Finnish-Norwegian creative duo Karoline Hjorth and Riitta Ikonen. Work on it began in Norway in 2011 and continues to this day.

The source of inspiration for this artist duo studying personifications of nature and folkloric explanations to natural phenomena, and the name of the exhibition and the project ‘Eyes as Big as Plates’ is, according to the artists’ words, ‘borrowed from folk tales, so there’s one with a dog that’s living beneath the bridge and another version where it’s a troll doing the same thing, and this open-eyed and potentially risky approach to seeing the world around you has become an emblem of the curiosity that guides our interactions’.

From the outset the project evolved into a continual search looking at how modern humans belong to nature. Driven by curiosity and imagination, Karoline Hjorth and Riitta Ikonen have so far travelled to fifteen countries on a quest to understand our relationship with our surroundings. As the project continues to cross borders, it aims to generate new perspectives on who we are and where we belong.

Combining their artistic skills to create sculptures, installations and photography, Karoline Hjorth and Riitta Ikonen work together with their collaborators at all stages of the project: from choosing a location to shooting characters in headdresses and costumes created from natural components (grasses, moss, algae, flowers, branches, stones, shells, etc.). Unique wearable sculptures made from natural elements allow the characters to blend in with the surrounding landscape. Solitary figures masterfully inscribed in austere landscapes are a metaphor for unity between human and nature.

Karoline Hjorth and Riitta Ikonen invite older people among others to participate in the project – one of the artists’ most important tasks is to rediscover a demographic group too often labelled as marginalised. The heroes of the photo sessions are retired farmers, fishermen, zoologists, plumbers, parachutists, opera singers, housewives, artists, scientists, etc. The artists find them through friends, relatives and newspaper advertisements; they meet at hardware stores, gardening society meetings, swimming pools and senior centres, or on city streets, etc. Works included in the exhibition were produced in Norway, Finland, Iceland, Sweden, Greenland, the Faroe Islands, France, the UK, the USA, Japan, South Korea, Czech Republic, Scotland, Senegal and Tasmania.

The ‘Eyes as Big as Plates’ series toured with the Norwegian National Museum and has been shown at the Kiasma Museum of Contemporary Arts (Finland), Chimney and Pioneer Works/Recess galleries in New York, Bogota International Photo Biennale (Colombia), Fotogalleriet and Shoot Gallery in Oslo, the Kunsthall Grenland (Porsgrunn, Norway), the NADA Miami and Art Toronto fairs, the Seibu Shibuya gallery (Tokyo), the Bemis Centre for Contemporary Arts (USA), the Finnish Institute in Oslo, Paris and Stockholm, The Nordic House in Reykjavik, the Palazzo Borghese and the Galleria del Cembalo in Rome, FACTORY and SEOULLO galleries in Seoul, the Landskrona Foto festival (Sweden), the National Museum of Greenland, Salamanca Arts Centre (Tasmania), etc.

In 2017 the independent publisher Press Publishing issued ‘Eyes as Big as Plates’ as a book. The artists invited award-winning designer Greger Ulf Nilson to work on it. Each book in the first edition is hand-finished and unique, with thinly pressed vegetation veiled underneath the cover cloth to honour each of the collaborators in the project. The book was nominated for the Paris Photo/Aperture Foundation Photobook Awards in the Best First Photobook category and shortlisted as one of 20 titles from nearly 1000 nominees, winning the prize for the best cover in Norway. In 2016 ‘Eyes as Big as Plates’ also won the Photocrowd Award of the British Society of Gerontology and the Nordic Crowdfunding Alliance’s ‘Best Norwegian Crowdfunding Campaign’ in the Culture and Arts category.

Artist, photographer and writer Karoline Hjorth is a graduate of the University of Westminster (London), the holder of a Bachelor’s degree in Photographic Arts and a Master’s degree in International Journalism. Artist Riitta Ikonen graduated from the Royal College of Art in 2008 with a Master’s degree in Communication Arts.

Works by Hjorth and Ikonen have been exhibited in solo and group exhibitions at the Museum of Contemporary Art Kiasma, the Tate Britain, the NADA Miami Fair, the National Museum of Greenland, the Salamanca Arts Centre (Tasmania), the London 2012 Olympic Park and 2018 PyeongChang Olympics.

Karoline Hjorth And Riitta Ikonen : Eyes as Big as Plates