MAMM : Alexander Strinadko : On the Eve of Perestroika 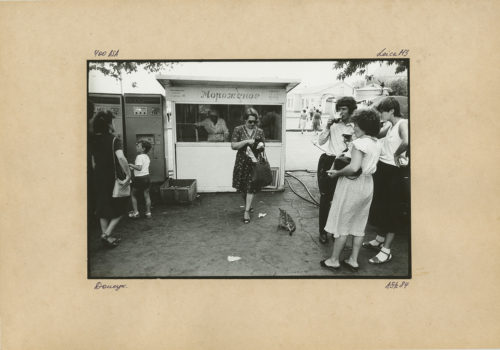 Alexander Strinadko is recognised as one of the most brilliant representatives of contemporary documentary photography. In his work we can detect the influence of the classic Russian photographer Alexander Slyusarev. But while Slyusarev was committed to metaphysics and pure forms bordering on abstraction, Strinadko’s interest lies in the subject matter and everyday life, on the basis of which he resolves complex compositional tasks. The images included in the exhibition ‘On the Eve of Perestroika’ were added to the МАММ collection just recently. The museum presents a solo exhibition of the photographer’s work for the first time.

Alexander Strinadko was born in Donetsk in 1961. He began taking photos while still at school, signing up for a photo club at the Pioneer Palace to keep company with a friend. Thanks to parents keen on photography Strinadko already had some technical skills by then. ‘I never studied photography,’ he says. ‘My first camera was passed down by my father — it was old, he used it in the army. My father took photos all his life, and I liked to watch him developing the film. For me it was like magic. That’s probably why I fell in love with photography myself.’

After he got interested in photography Strinadko searched for books on the topic and even did a swap with his classmate to obtain a photography instruction manual listing the possible compositions of developers, fixers, etc. In the seventh grade he already knew where to find all the shops selling chemical reagents in Donetsk. In his first year at the Donetsk Polytechnic Institute (Alexander Strinadko studied to be a mining engineer) he began attending the Ugolyok photo club at the October Revolution House of Culture. Igor Zakharov, who headed the club, introduced him to work by the best foreign photographers, showing him a collection of issues from ‘Revue Fotografie’, the legendary Czech magazine dedicated to art photography. Soon Strinadko began collaborating with the Donbass publishing house, and after his studies at the institute and some distribution work he decided to devote himself entirely to photography.

The exhibition ‘On the Eve of Perestroika’ presents images by Strinadko produced between 1983 and 1984 in Donetsk, Zaporozhye and Odessa. In those years Strinadko was still a very young photographer, but he already possessed an amazingly accurate sense of the times. Strinadko documents everyday Soviet life on the eve of radical change: the country’s leadership will soon announce perestroika, defining the start of a whole new era. Strinadko’s photographs have become a valuable testimony of this period, since they convey a state of latent expectation, and a sense of the emptiness replacing the ideology that once occupied the entire living space of Soviet people. The photographer focuses his attention on the city and everyday events unfolding against this background. Strinadko’s gaze is directed precisely at aspects of life that seem unremarkable and unostentatious: ‘I loved taking shots of the city itself. Particularly the backstreets, which most people initially find unappealing. There are many such places in the town centre. And also the various mass events, crowds of people filled with emotion,’ recalls the photographer. His shots are devoid of feigned optimism and propaganda clichés. Strinadko himself defines the genre in which he works as ‘subjective documentary’: ‘You simply reflect your attitude to what happens or exists. This is how I perceived my photos of the city. I tried to keep everything as it actually was, that’s why I never improved the resulting subject matter by frame editing. That is my principle – what appears in the photograph is what was intended.’

Refusing to manipulate the image after the fact, Strinadko works brilliantly with the composition at the time of shooting. His best shots are like structures with ideally stable architectonics. Their compositional perfection is all the more valuable because the photographer is able to achieve this in the thick of events. ‘My aim is not to make pretty pictures,’ says the photographer. ‘Probably few people would choose to depict the same things as me. But I see beauty in everything I photograph.’

In today’s digital age Alexander Strinadko still prefers to work with Leica and Nikon rangefinder film cameras, having tried nearly all the different models during his forty years of taking pictures. Strinadko is a member of the National Union of Photographers in Ukraine. He lives and works in Donetsk.

Alexander Strinadko : On the Eve of Perestroika