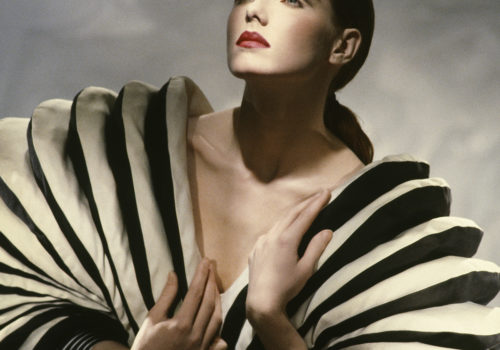 As part of the XII Moscow International Biennale ‘Fashion and Style in Photography 2021’, the Multimedia Art Museum, Moscow presents the first solo exhibition by Alberta Tiburzi, the iconic Italian model and fashion photographer. In the 1960s Tiburzi never left the covers of ‘Vogue’ and ‘Harper’s Bazaar’, and her own photos for fashion magazines were recognised by the masters of world photography.

Alberta Tiburzi was born in Rome. When still very young she caught the eye of a modelling agency scout on a street in the Eternal City, and before long she was posing for some of the greatest photographers — from Richard Avedon to Helmut Newton, Gian Paolo Barbieri, Irving Penn and Hiro Wakabayashi. It was Wakabayashi who gave her a Minolta camera, which she used to take her own pictures.

At first Tiburzi perceived photography as a game, a personal challenge, since she knew she had three ‘flaws’: being beautiful, being a woman, and coming from Rome. However the first shots, taken almost casually and with a still unsteady hand, were acclaimed by Wakabayashi and other masters, who were so impressed by the audacity of her angles and bold play of light that they convinced her not to abandon photography. Later Tiburzi would be called the ‘signora della luce’, ‘queen of light’ — as you may recall, Fellini believed that the visual arts were founded on light.

In the late 1960s famous ‘Vogue’ editor Diana Vreeland invited her to New York, where Tiburzi joined the dynamic life of the cultural capital. She visited the Andy Warhol Factory and met with the luminaries of photography, from whom, as an observant person, she adopted not so much the technique of photography as its spirit.

Tiburzi was about to enter the world of fashion as a photographer, setting out as a photojournalist — very typical for the Italy of the late 70s to early 80s as it bade farewell to the ‘leaden Seventies’. She worked for the popular magazine ‘L’Espresso’ and photographed European and Hollywood stars when they visited Rome.

Soon Tiburzi became one of the most sought-after photographers working for glossy magazines. She was taking pictures at the heyday of high fashion in Italy, when Italian couturiers were celebrated the world over. Tiburzi, like no other, sought a special chemical connection between the outfit, the model and the surrounding space — this is particularly noticeable in the shoots held in Rome. At the same time, the sensuality of the Italian Baroque and the rigour of rational architecture never overshadow the leading character in the frame — the fashions. Due to the abundance of mirrors and reflectors, the set where Tiburzi worked looked like a film studio, and thanks to techniques borrowed from avant-garde art, abstract elements burst into the photographic space. The whimsical forms captured in the frame are an echo of the formal searches actively pursued on the world art scene at that time by the leading lights of Pop Art, Spatialism, Kinetic Art and Matiérisme.

Alberta Tiburzi personally monitors the shooting process from start to finish and selects the models herself, sometimes showing rare intuition. Among those discovered by Tiburzi are true fashion icons such as Simonetta Gianfelici, whose features recall Botticelli’s models, and the Canadian Dayle Haddon.

The woman in Tiburzi’s photographs is free, modern, energetic and sensual — she lives in harmony with the natural environment. In Tiburzi’s perception of the female body there is never a hint of the male fetishism where struggle and submission prevail. In her photographs she liberates pure beauty and femininity from the entrenched stereotypes now seen as relics of the past.

Alberta Tiburzi played herself in ‘The Fall’, a film by English director Peter Whitehead. Some say she was the prototype for the photographer played by Faye Dunaway in Irvin Kershner’s 1978 thriller ‘Eyes of Laura Mars’. Tiburzi’s work has been published in various photo journals and books, including ‘Life Photographers’, ‘Progresso fotografico’, ‘Fotopratica’, ‘Il mestiere di fotografo’, ‘Fotografia e seduzione nei luoghi del disincanto’, and many others.

Alberta Tiburzi : A Brilliant Epoch. Italian Fashion of the 80s