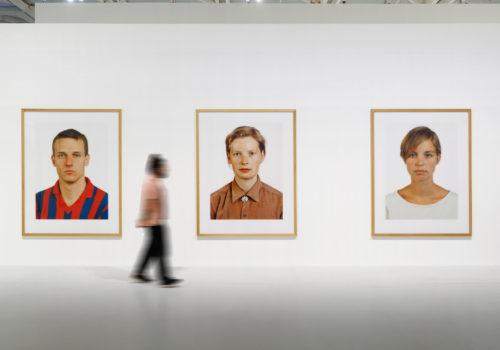 The Musée d’art moderne et contemporain de Saint-Étienne offers Thomas Ruff his first exhibition in France. Conceived as a history of photography through its processes, the exhibition brilliantly reveals a complex work on the status of the image, its potential and its lies.

He is a photographer who no longer photographs. Except for the use of his telephone, which serves him as it does all of us as an immediate memory, Thomas Ruff has abandoned the film cameras of his beginnings in recent years, and then the digital ones of the turn of the century, to devote himself solely to the image. Worse still, the artist recently declared to Libération that he “adores photos that lie” and reveals himself to be a spurious twister of images.

He is, all emphatic formulas retained, an artist conscious of the fluctuating, vaporous, even manipulative function of images. His work formulates a plea, ironic as well as learned, to bring the viewer to reflect on what seeing means. In this, he follows in the footsteps of Bernd & Hilla Becher, his professors at the Kunstakademie in Düsseldorf, who welcomed Ruff at the age of 19, and who trained Andreas Gursky and Thomas Struth, among other students.

The exhibition thus begins with a nose dive. “Bonfils”, the first of the seventeen series shown in the exhibition, is also the last one made by the artist (at the time of the exhibition). It inaugurates a particular, biased, subjective history of photography thought up by the artist and his curator, Alexandre Quoi, scientific director of the MAMC+. The “Bonfils” series is based on reproductions of 150-year-old glass negatives of ancient sites in the Middle East. Produced by the Bonfils studio, the prints of these negatives could not be enlarged or reduced in the late 19th century and were required to be re-photographed.

Thomas Ruff’s prints have the appearance of archival documents, and would seem almost similar to those of the Bonfils studio, if the photographer had not altered them, aged them, in order to reveal all their liabilities. Throughout the exhibition, his series echo in filigree a frieze of technological processes that often led the image to redefine itself.

Thus, in the next room, the viewer is confronted with his peers. Huge portraits of about two meters give to see the asperities of the skin, the motionless glance of the subjects, the banality even of the expressions. The “Porträts” series dates from 1990 and refers directly to the influence of Bernd & Hilla Becher on their young pupil, and in essence the entire Düsseldorf school. Thomas Ruff has thus opted for a neutral structure, almost administrative if one thinks of the prerequisites of identity photographs, and asks his models – friends, students of the school, nyctalopic encounters – to pose without feeling, with seriousness, with the greatest objectivity.

On the photographic subject itself, Bernd & Hilla Becher stated that “their aesthetics are characterized in that they were created without aesthetic intent.” This same disinterest in the feeling of beauty characterizes the “Porträts” series, which is much more concerned with measuring the effects produced by the image on the viewer. This is its ambivalence: if the image is meant to be neutral, the 2-meter high prints break with the neutrality of the intention. There is only one step to confer to the models a form of malice, of weariness, of gaiety that each one amuses himself to detect as soon as he is confronted with a face, which moreover when its dimensions are exaggerated.

This mythical series, which gave Ruff his letters of nobility, will later give his counterpart. “Anderes Pörtrats”, conceived in 1992 by Thomas Ruff. That year, Ruff discovered a device used by the German police to generate photographs of suspects (the Minolta Montage Unit), which allows four portraits to be merged into one. Ruff combines several of his old “anonymous” portraits with new ones, and composes seemingly realistic faces that are, however, entirely fake. This was an innovative process in its time and will be continued in the digital era, with greater ease if not excess, if we think of the possible uses of Photoshop.

The historical archive and the portrait are two topoi specific to the exhibition, as is the political image. Ruff is fond of them, like the documents and magazines inherited from Nazi and Soviet propaganda, which he uses and confronts as Vasily Grossman did before him in literature, in a similar gesture, in Life and Fate (1962).

We thus find the figure of Mao Zedong among other politicians, preferably with a dictatorial past, even if we find here and there more democratic figures. This narrowed hanging of the series “Press photographs”, without any caption, also indirectly questions what we see. The information disappeared, the context of publication retracted, what does the image  before us means?

The external propaganda newspaper La Chine also serves as material for the series “Tableaux chinois” (2019-2021). Published by the official Chinese organ for a French-speaking audience, the newspaper is full of slick portraits of Zedong and bucolic scenes, narrating an idealized social reality. Under Ruff’s hand, the ridiculously enlarged image is also pixelated in order to “unmask”, in Alexandre Quoi’s words, its manipulative function.

There is not a field where images can be found that has not been explored by Thomas Ruff. Pornographic photography in the “nudes” series, surveillance images in “nacht”, spatial imagery in “star”… His work has apprehended the image as a disruption of our social and political spheres. The exhibition wonderfully expresses the deception of the image, its deceptive nature as much as its unlimited possibilities of creation and alteration by technology. All this, in a single work.

Of this stupefaction, it remains between our hands a leporello conceived by the artist and the museum. On the front, it reveals a selection of the works exhibited and on the back, each of the corresponding sources and techniques used by Thomas Ruff. Over nearly three meters, once unrolled, the accordion- book allows us to lose ourselves in this story, partial but so well told, of images as a pretense. *

* These lines are entirely partial, the author having actively contributed to the exhibition and the edition of the leporello Thomas Ruff. Metaphotography.