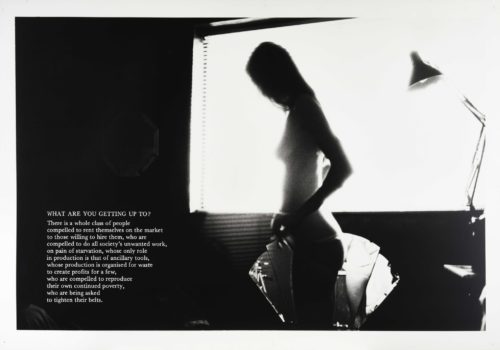 Liliane and Michel Durand-Dessert were luminous gallery owners who worked in Paris from 1975 to 2004, and were both informed and avant-garde collectors. They bequeathed to the Musée d’art moderne et contemporain de Saint-Étienne Métropole (MAMC+) an exceptional donation of more than 180 works and some fifty editions, which are on display these days in the exhibition “Double Je. Durand-Dessert Donation and MAMC+ Collections”.

The story linking the Durand-Dessert couple and the MAMC+ begins with Bernard Ceysson, the first director of what is familiarly known as the “Musée de Saint-Étienne”. Ceysson knew the Durand-Dessert gallery for its support of the emerging contemporary scenes in Germany (Beuys, Richter, Rückriem…), England (Hilliard, Flanagan, Tremlett…) or Italy (Boetti, Kounellis, Merz…). The gallery thus allowed the emergence of international figures such as Gerhard Richter, who was little known in France at the time, or even despised, and defended French artists with different trajectories, from the figurative and mythological Garouste to the geometric Morellet.

From 1978 to 1987, Bernard Ceysson acquired an oil on canvas by Morellet (François Morellet, 3200 squares, 1957), a tree by Giuseppe Penone, a Voltaic Arc by his compatriot Gilberto Zorio, and works by Richter, Lavier, and Tremlett from the Durand-Dessert gallery. These commercial exchanges were transformed when the gallery owners donated two masterpieces to the new museum: a painting by Gerhard Richter (Skull, 1983) and a sculpture by Luciano Fabro (The Eye of God, 1969). A friendship was born, continued  for thirty years.

The exhibition, conceived by curator Alexandre Quoi, scientific director of the MAMC+, proposes a conversation between works from the recent Durand-Dessert donation and works already in the museum’s collections. This confrontation underlines the enrichment of existing collections (Cadere, Beuys, Morellet, to name but a few) while filling in gaps (Paolini, Wegman, Hilliard, etc.).

A collection is inscribed as much in its fullness as in its hollows. To study it, to see it hung is to see its masterpieces, its constants and its gaps. It also means reading chapters of a certain history of art. And it is clear from the exhibition that photography has a special place in it. The Durand-Dessert donation adds colour to a photographic collection of great depth, comprising nearly 8,000 works (out of the 20,000 conserved at the MAMC+).

The Durand-Dessert donation is full of small rarities, such as the luminous prints by Carel Balth, playing with the depths of cold blues and greys and seeking the repetition of simple, hypnotic motifs (Line I, 1976) and (Edge I, 1977). These two works reflect on the process of photography itself, playing with natural and artificial light. The couple also bequeathed a series by Victor Burgin, “UK 76”, which tells the story of British consumer society, the injunctions of advertising and the gap with a society torn by its social problems, through images and text, as a documentary. This deeply ironic series is still terribly relevant today.

Another surprise is Patrick Tosani’s somewhat confusing series of ‘Nails’. Although these excrescences may appear to be damaged, vulgar and even mutilated in their white, smudged frame, they are nonetheless haunting. These are again works of a reflexive nature, embodying the duality of the photographic medium, of the sometimes fascinating and sometimes repulsive image. This photographic questioning also closes the exhibition, by looking for the link between anonymous and amateur photography, as practiced by Christian Boltanski, while raising the impossible search for objectivity by Patrick Tosani, or by the representatives of the Düsseldorf School (Becher, Ruff, Struth).

“Double Je” is full of small editions, artists’ books and artists’ magazines that deserve close attention. These include the postcards published by Joseph Beuys and Staeck, Annette Messager’s postcards for the Durand-Dessert wedding in 1974, and Tania Mouraud’s postcards, which were conceived as performances in their own right, to be sent in order, letter by letter, so that the recipient would form the final word “M E M O R Y”. These documents show how much photography contributed to what postal art was, recording performances in memory and history (like Cadere), while remaining a simple support for invitation cards and documents.

The Durand-Dessert donation is a major one in terms of works, editions, documents and archives, and is thus part of a rich history of donations to the MAMC+. It follows on from those of Vicky Rémy, Ninon and François Robelin in the 1990s, and the Caisse des dépôts et consignations the following decade. The exhibition remains proof, if not affirmation, of the necessary relationship between public collections and collectors. It allows us to measure how profoundly intellectual these exchanges can be.