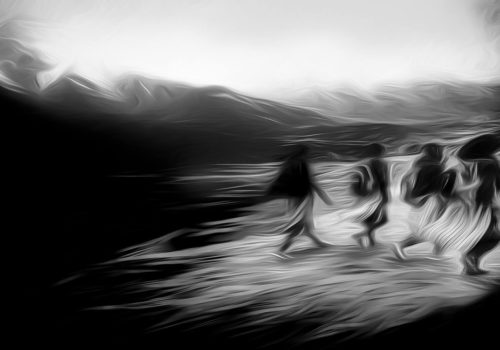 The images displayed here are the first in a series of a personal journey where I search answers to some fundamental questions about life, its meaning and purpose and then later my understanding about nature of ‘Reality’. This quest is taking me to every nook and corner of India meeting sadhus, monks, philosophers, scientists and charlatans alike.

Images of this story were shot in different regions of Ladakh and Zanskar, including ancient Buddhist Monasteries dating back more than 3000 years. These monasteries are located in the remotest regions of the Indian Himalayas.

I am an abstract street photographer, passionate about shooting random happenings and unknown faces on streets. Photography comes to me as a fulfillment of a void which has plagued me from my childhood. You will find this emptiness reflecting in most of my images and style. Isolation resulting because of the pandemic made me search rigorously for a style which I could call entirely my own. My current work is a result of that very search. Many international magazines and galleries have published & displayed my recent work.

Constant interaction with brilliant Vedic & Buddhist scholars and philosophers has made me understand that the concept of a ‘Creator God’ proposed by organized religion is a childish one. It has failed to fully comprehend that unconditioned, non-dual, eternal omnipresent force. God is not a glorified Being sitting somewhere in the universe, directing lives of its people or attending to minute details of its day to day operations. We need to understand that the ‘Universal Mind’ does not exist separately in the universe but in it and as it.

The universe was not arbitrarily created by any outside intervention but is self- born and governed by the eternal Law Of Cause and Effect or Karma. Impressions of all objects in the universe lie dormant within the inner depths of the Universal Mind, until they become active by the working of Karma. They are then projected in our familiar space-time dimension which we know as the material world. The universe is not only self-actuating but also self-determining.