Lydie Jean-Dit-Pannel emerging from her chrysalis 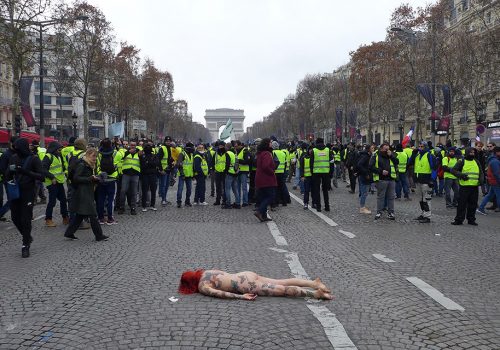 From the entry of her extraordinary exhibition at the Dole Museum of Fine Arts, we seem to recognize the familiar and exhilarating terrain of the pure tradition of women self-portraitists, and we keep thinking of Francesca Woodman, Nan Goldin, Cindy Sherman, and especially Sophie Calle, whose omnipresence manifests itself through a photo of the artist Lydie Jean-Dit-Pannel lying on the tombstone of her favorite author-poet Charles Bukowski.

Lydie Jean-Dit-Pannel carries her unusual family name like a nom de guerre, which led us to consult the website politologue.com according to which “between 1891 and 2000, there were 32 births of people bearing the family name JEAN DIT PANNEL in France. With an average life expectancy of 80 years, we estimate that there are around 24 people born in France” with this name. “A French visual artist born July 9, 1968 in Montbéliard,” says Wikipedia, Lydie is today one of the 24 rare members of the Jean-Dit-Pannel clan in France. Wikipedia continues: “She lives and works between Dijon and Malakoff, and is teaching at Dijon’s École Nationale Supérieure d’Art since 2012. She has been exploring the question of image since the 1980s through long-term projects.” Therefore, born amidst the echoes and smells of tear gas from the May 1968 protests, though faraway, Lydie has a rebel seed, she is a fighter, as we can see from the poster of her retrospective “Alive”, entitled “Auto-Arm Wrestling”. Right after the entrance of the museum there is a real arm-wrestling table, inviting the public to get into fight mood. Because this is a fight that Lydie has been leading for years, alone, especially against nuclear power stations and other toxic places.

She shares common concerns with her four elders mentioned above who have now been inducted into the Hall of Fame of Self-Portrait with works entirely centered on oneself, however, theirs have never been simple self-portraits but self-representations based on their own life, using their bodies as a fundamental accessory to their narratives, a syllabus of their own language, one could say in the case of Lydia, using even her own skin. The French expression that comes to mind is “payer de sa personne – putting oneself on the line, with a connotation of self-sacrifice, because it is her body that Lydie offers on the altar of the fight against toxic places, her body “stung” by several dozens of tattoos of monarch butterflies, life size, putting her body on the line to draw a defense barrier to protect the endangered entomofauna, set against the backdrop of man-altered landscapes disfigured by death, industry, pesticides, oil, nuclear, toxic waste, everything that kills butterflies, bees and millions of insects and billions of birds around the world in the past four decades.

One can only marvel at her beautiful self-portrait “the girl with the owl”, a tender kiss of the bird lying on the face of a sleeping beauty, the totem bird of the transition from the world of the living to the world beyond. To lead her long range fight, Lydie travels France and the world since 2005, collecting incriminating exhibits, after the United States, Ukraine (Chernobyl) and Japan (Fukushima), she completed between 2015 and 2016 the “tour de France nucleaire”, all by herself, in the series “14 Seconds” which is the duration of the self-timer set on her camera mounted on tripod, “14 seconds” is the time needed to undress, throw oneself on the ground, and stop breathing for the posing time. There are of course other pictures taken with accomplices. But these 14 seconds remind me of Chinese photographer Ou Zhihang, who received an honorable mention of the 2010 World Press Photo Awards for contemporary issues, who has spent twenty years to compose his series of thousands of self-portrait, in the nude, doing push-ups, in front of buildings or places of scandal in China, in the posture of a watcher, resting on his hands, his body erect acting like an arrow pointed towards the offending location.

Whereas Lydie Jean-Dit-Pannel’s body, flat on her stomach like an inert corpse dumped at the roadside, appears like a signaling beacon, an object of forensic study, the price paid for her person is also the radiation collected in front of the 37 French nuclear sites, plus sites in Belgium, Switzerland, England and Scotland and in the United States, not to forget her visits to Chernobyl and Fukushima. It was not just the atoms that attracted her, sometimes she is lying in the middle of garbage dumps, other times she is lying in the middle of felled tree trunks. Everywhere she would be exposed to the hassle of security guards and other prying eyes. Lydie went as far as to embody a female monarch butterfly to be pinned by an authentic entomologist-researcher Jacques Pierre, on his working table in the heart of the reserve of the National Museum of Natural History of the city of Paris. “The image suspends the moment before the pinning of a rare species, according to Lydie, the composition is inspired by “The anatomist”, a painting by Gabriel Von Max (1869).” Here it would be appropriate to quote Charles Bukowski’s poem “Style” from one of his public readings in 1974: “Style is the answer to everything, a fresh way to approach a dull or dangerous thing. To do a dull thing with style is preferable to doing a dangerous thing without it. To do a dangerous thing with style is what I call art.”

A tireless collector, Lydie has brought back thousands of “do not disturb” signs found behind the doors of hotels around the world to create a monumental wall installation. Yet her finest collection is on her own body, after having learned of the massive disappearance of monarch butterflies at the Montreal insectarium in 2003, she begun collecting tattoos of monarch butterfly by local tattoo artists whenever she traveled. By the end of 2019, her collection includes a total of 47 tattoos from: Quebec, Nimes, Paris, Dijon, London, San Francisco, Las Vegas, Cheyenne, Geneva, Marseille, Caen, Copenhagen, Paris, Mexico, Acapulco, Madrid, Budapest, Dijon, Merida, Chiang Mai, Bangkok, Karlsruhe, 20 Ans du Wharf, Cape Canaveral, Miami, Bourges, Belfort, Tokyo, Kuching, Kuala Lumpur, Montreal, Mexico, Gdansk, Almeria, Roswell, Los Angeles, Austin, Saint-Pierre (Reunion), Xalapa, Hiroshima, Kiev, Paris, Moscow, Liège, Naples, Vladivostok and Chicago. The project was paused in 2020 due to the pandemic.

Besides photography, we should mention a remarkable installation, a tribute by Lydie Jean-Dit-Pannel to the Boat People: the “Mediterranean” installation is carried out with 3,500 little toy boats made from wood shavings, nut shells, matches and paper. The caption says on average every year 3,500 people perish in the Mediterranean Sea trying to escape the violence ravaging their countries. Another cartel thanks the Huilerie de Briennon sur Armançon, Suguenon-Schultz in Burgundy Franche-Comté.

My thanks to the Dole Museum of Fine Arts and to Lydie Jean-Dit-Pannel for the photographs and the answers to my questions.