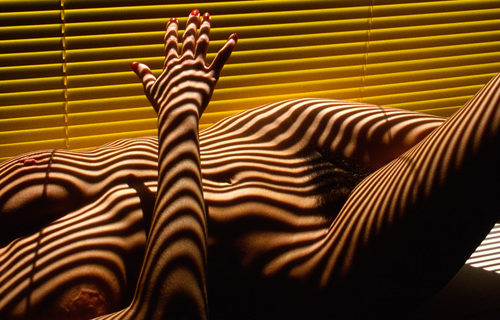 Founder of the Rencontres d’Arles festival in 1970, Lucien Clergue was the first photographer, with Yann Arthus-Bertrand, to be offered a chair at the prestigious Académie des Beaux-Arts de l’Institut de France. The latest exhibition of his work at the FIAF in New York celebrates 50 years of his intimate relationship with America.

At the very back of the room, a large green shutter covers a window. On this November morning, the light barely passes through the iron slats. But on a nice day, Lucien Clergue, now in his 70s, welcomes in the light that striped his famous “zebra” nudes. The artist chose this apartment on 51st street., which doubles at his studio, to discuss his latest New York exhibition. A series of 36 photographs, Clergue in America marks the 50th anniversary of his arrival in this country. (A larger version of the exhibition was shown in Arles last May.)

The story of Clergue in America begins in 1961, when Edward Steichen, then director of the photography department at the MoMA, offered to exhibit a few of Clergue’s pictures. The project, Steichen’s last during his tenure there, launched Clergue’s career. When the photographer, who had until then been working in a factory in Arles, arrived in America, he was immediately struck by its architecture. “When I first saw New York that year,” he recalls, “I discovered for the first time a city made of squares. It was like nothing I had ever seen, having grown up surrounded by Roman and Romanesque architecture, where the curve reigns supreme. It was in New York, and later in Brasilia and Chandigarh, that I first formed close relationships with architects like Oscar Niemeyer and Marcel Breuer.”

Clergue also has a background in painting. He was encouraged by a certain Pablo Picasso, to whom Clergue showed his photos when he was just 18. They remained friends until the painter’s death. He then decided to devote his career to the exploration of shapes and symbols, often sexual in nature. Clergue traveled across the United States, taking in the majestic countrysides and the deserts of Death Valley. He followed in the steps of Edward Weston and became friends with Ansel Adams, two great American landscape photographers. It was then that he began to develop the analogy between rocky, sandy landscapes and the human body that would figure into the rest of his career. A photograph imitating Edward Weston’s Point Lobos gave birth to Empreintes de Dieux and Langage de Sables. He would offer the latter as his university thesis “in images”—in those days, a decidedly non-conformist proposition.

Clergue’s most famous photographs are undoubtedly his female nudes. “If you weren’t sitting there,” he said, “a model would be, and I’d be behind my camera.” He finds in America an inspiration that elevates his work to a new dimension. It is due above all to the light, soft yet incisive, that he seeks out in this New York apartment (which he doesn’t own), or in the dunes of Death Valley and White Sands, accompanied by both white and black models. “I naively thought that women of color couldn’t get sunburns. One of poor girls I had lying out in the desert got burnt to a crisp.” He has also found in America the freedom to undertake the kind of experiments that would lead to his “surimpressions,” superimpositions of images inspired by his frequent visits to great American museums. (According to legend, the pictures were the result of an error.)

When Lucien Clergue, Academy member since 2006, isn’t roaming the streets of New York or cruising the roads of Santa Fe, he spends time in Paris and Arles. It was there in 1970 that he founded the Rencontres d’Arles festival, the other great work of his life. At a time when the market for French photography consisted mainly of gifts and exchanges, Clergue brought to Arles the vigorous acquisition policy that he had witnessed in the United States. He invited the great photographers to come exhibit their work, and to add to his nascent collection. “I wrote to forty photographers that I admired, and only one responded: Henri Cartier-Bresson.” Today a long list of photographers and industry luminaries converge on Arles every June. “Les Rencontres was in its youth like every child. It only had one thing on its mind: getting the hell out of the house! Now, it’s living its own life.”