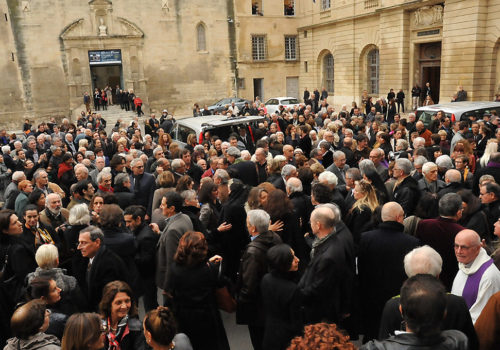 Lucien Clergue’s funeral was held in Arles on Friday, November 21st, 2014. The ceremony was held at St. Trophime church, Place de la République. The following pictures have been taken by Patrick Mercier, who has been Lucien Clergue‘assistant. He tells us his story.

Like photography and many things in life, my introduction to Lucien was a matter of coincidence.

In 1995 I was taking classes with Marc Bruguières to earn a degree in photography and looking for an internship. The photographer in Fontvieille, where I was living, steered me towards Lucien Clergue. I’d never heard of him. Clergue called me back after I left a message on his machine, and invited me to share my photographs with him at his studio one Saturday morning. I showed up not feeling anxious at all since, again, I didn’t know who Clergue was. He was immediately impressed by the few pictures I presented him with. The first thing he said was, “You have a real eye!” I didn’t know what that meant at the time, but I didn’t want to betray how little I knew about photography. I only knew one thing: that I knew how to take pictures, because at the end of the first week of classes, my professor was using my photographs as an example! Lucien told me, “I can’t take you on as an assistant because I already have one, but if you want, you can start to work on my archives.” I agreed, telling him that as long as I was with him, there would always be something to learn.