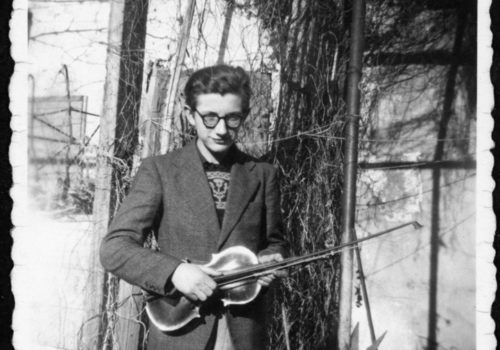 Being born in Arles, a city with 4600 history years behind it, makes you different; your roots are quite strong if they starts right with the beginning of civilization. I was born August 14, 1934, in the middle of summer in the afternoon at five, always my favorite hour to take photographs. My parents separated when I was six, and Worls War II began. I learned to play the violin, but at the age of ten I was send far away, deep into the coutryside to take care of five goats, as well as to help look after a number of children from Arles, who like myself, were trying to escape the war. I learned how to look at nature closely because I broke my glasses (we were poor).
When I returned to Arles, I had no home: it was totally distroyed by Amerlcan bombs dropped to stop the German army. ln the shop of my mother (she was selling foods and fruits to the prostitutes of the neighborhood) was an extraordinary old painting of the Virgln Mary and her son. The painting long ago disappeared, but its image is still in my mind. The painting so impressed me and probably introduced me to the power, the seduction, of beauty.

My next decade (1945-1955) was difficult. We moved from one house to another. My mother was very ill. I had to take care of her. I left school at the age of 19 to work in a factory. My mother died when I was 18 ans a half. The next year, though, I had a good fortune to meet Pablo Picasso at a bullring. I had stopped playing violin, and for the lack of funds I could not go to school in Paris. I started taking photographs with different cameras owned by a man close to my home. Picasso signed one of the print, not my best, but now it is the most expensive. When I reached the age of 20 I was still working in a factory, but I was taking photographs of five children dressed with clothes designed by me. I was trying to make Picasso happy : he had said at the bullring « I want to see more prints ».