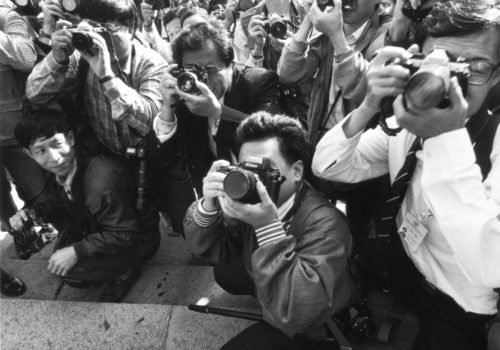 Sometimes it seems that traditional documentary approaches in the world of photography are in terminal retreat before the onslaught of market-fuelled, curator-driven post-modernist practices. At a naively straightforward level, the work of Lee Friedlander stands as a riposte to post-modernism’s discrediting of the notion that the truth is out there and photographically accessible. There is something preciously transparent – precious but not naïve – about a style that does not seek inscrutability; a way of taking pictures that avoids interrogating the ontological status of the photographic image.

Photography was thought to displace pictorial painting as a way of recording visual experiences given the camera’s apparent ability to act as an objective eye, capable of enshrining an unmediated reality. A canvas could depict a galloping horse with all four hooves off the ground but it took a photo by Eadweard Muybridge in 1878 to verify the phenomenon. The promise of an iterative reproducibility of what is seen emerges from The People’s Pictures as a compelling need to place a camera between our eyes and what lies before them.

The People’s Pictures is part of Friedlander’s omnivorous project to document, in his now familiar term, America’s ‘social landscape’ (though this book also covers parts of western Europe and Asia). This book’s selection from his vast collection attends to ordinary people with their everyday cameras in a pre-selfie world and he achieves this – naturally, inevitably, ironically – by taking pictures of people taking pictures. Their bodily existence, their creatureliness, becomes part of the scene and robs photographers of their role as a static and invisible presence. In this, of course, there is a reflexive subtext given that Friedlander himself becomes a doppleganger of the person with the camera that he is photographing. This boomerang effect makes him an unseen part of the scene.

Friedlander brings irony and intelligence into play, something especially evident in the second half of the book where people are defined not by their use of point-and-shoot camera but by the images around them: a woman waits to cross a street and rests her hand unselfconsciously on a photo of a politician seeking election; people (as on the book’s front cover) hold up pictures of those they want to remember; a driver cannot help but see an advertisement for soft porn on the rear of the vehicle in front. One superb shot, characteristic of Friedlander at his best, demonstrates his ability to compose a frame from a fluid street situation, bringing the apparently random into a judicious arrangement that lifts the mundane into the miraculous: New York City, 2012, a large-scale image of Trump dominates a pedestrian crossing, his hand and forefinger pointing outwards, emblazoned with the words ‘Prove It!. Of the citizens going about their business, one of them has his own forefinger sticking in the air and a woman behind him is making a similar gesture with her little finger but neither of them seem aware of the Trump image. In the background another picture, an advertisement, for the Magic City television series, wraps itself around a corner building and proclaims that ‘The beautiful life is about to get ugly’.

The French film theorist, Christian Metz, wrote how the (cinematic) camera can ‘striptease the space’ to reveal all. Friedlander does the opposite, showing a space that never approaches nudity but reveals all that is within his frame at a particular time and in a particular place.
Sean Sheehan