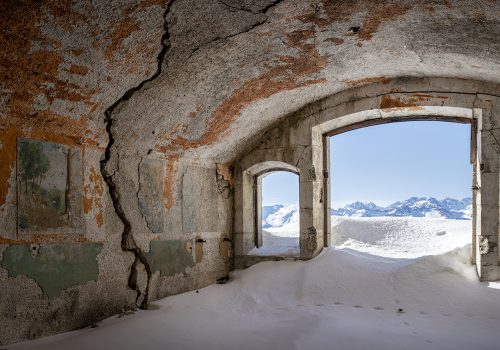 Michel Eisenlohr shed light on the fortified heritage of the 19th and 20th centuries located on border territories between France and Italy, camouflaged in the landscape or, on the contrary, impressive and majestic like the silhouettes of lookouts. Over the seasons, from 2015 to 2020, Michel Eisenlohr sought out the other history of these places, that where the “great” History rubs shoulders with that of the infinitesimal. Where drama, intimacy and mystery come together.

Born in 1974, Michel Eisenlohr’s photographic itinerary is the result of a passion for travel literature, a university career on the rites of Initiation, and the discovery of territories marked by tangible or immaterial traces. of man and his beliefs.

It was during a trip to Dogon country in 1998 that he made his first images. Since then, he has continued to report in France and abroad, around the Mediterranean, from West Africa to the Middle East, in India or more recently in Iceland or Asia. He is attached to urban landscapes, Marseille, then Aleppo, Porto, Reykjavik or even Hong Kong. Spirit of cities, contemporary architectures, memory of places and territories in mutations: so many subjects on which he looks at with poetry and great artistic freedom.

Novelist, writer, poet, art critic, author of several works of fiction and literary texts but also director of short films based on his own texts or those of fellow writers. Curator of contemporary art exhibitions in France and Morocco, Bernard Collet has published several artist monographs.

On the cusp of a health crisis that has turned the world upside down, stories of exile meet in a geste crossing photographic image and theatrical form, carried by young migrant refugee actors and generating a successful creation of the order of the uprising. The two authors live and experience in an artistic “common” a creative insurrection which turns out to be a vector of transformation of oneself and of the other, of sensitive attention and of ethical and political action, where new alliances of documentary photography with the world, constituting the construction of a “sensitive democracy”. Concrete utopia, act of resistance opening up to the implementation of a citizen and participatory art, creator of a new world.

Christine Delory-Momberger is an academic, essayist, writer and photographer author. She is the author of numerous publications and interview books with photographers (Antoine d´Agata, Jane Evelyn Atwood, Klavdij Sluban, Stéphane Duroy). Her work as a photographer fits into the new writings of documentary photography.

Valentin Bardawil is director and co-founder of Photo Doc. which works to support and develop documentary photography, by organizing events around an annual Fair and various exhibition venues. In collaboration with researchers, Photo Doc. is also developing an Observatory for new documentary writing.