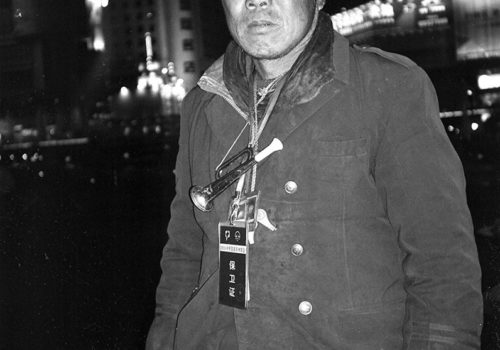 Suān tian kŭ là draws its inspiration from a Chinese expression that designates the four flavors – sour, sweet, bitter and spicy – and also acts as a metaphor for the vagaries of human life. Borrowing this old adage, the exhibition draws attention to a China at human height, a China made up of a diversity of people and points of view and not the great monolith which, seen from the west, fascinates and above all worries. With Suān tian kŭ there, the idea is to reflect a little of this plurality through the eyes of four photographers who, each in their own way, portray their environment and their time with consistency and sensitivity.

Drawing on various series produced for the most part between 2004 and 2011 – They by Zhang Xiao, Obsessed by Sun Yanchu, Open Air by Lu Yanpeng and a selection of the work of Ren Hang – the exhibition gives to see, as much as to taste. and experience, different textures of China and different personalities of photographic creation which, ten years later, with the exception of Ren Hang who died prematurely, are still active elements.

In 2021, responding to the kind invitation of La Filature, Scène nationale de Mulhouse, the works of the four photographers, like time capsules, will be redeployed. This  original initiative, against the frenzy of novelty which characterizes contemporary distribution, will allow us to look back on works carried out ten years ago and to assess their maturation in the light of today’s context. 10 years is not enough, but on a human scale it is significant  … especially in a country such as China which, for 40 years, has been engaged in a frenzied march towards progress and which, ironically, was the epicenter of the pandemic which still affects the whole world today. Since 2011, life has taken its course. Indeed, China continued its irresistible ascent as a great power, and intensive urban planning migrated from the coastline to the interior of the country, turning the countryside into branches of cities.

The countryside of Shandong, home province of Zhang Xiao, a major apple producer, have been reorganized in favor of intensive agriculture, which is carried out with a lot of pesticides and chemical fertilizers. Alarmed by the ongoing ecological disaster in the region, Zhang Xiao returned to Yantai where he is developing Apple, a project combining photography, video and sculpture to evoke the apple, pillar of the local economy and current metaphor for productivist drifts.

Still based in Zhengzhou, capital of Henan province and now a devoted father, Sun Yanchu pursues a hybrid practice of photography within the walls of his studio rather than on the road. Eager for matter, intervention and even dissection, he manipulates BW prints, his own and others, found at the flea markets by applying ink, paint, glue or blood. His photo books, such as Ficciones, are as many fragments resulting from his experiments and an invitation to explore the depths of the images.

Returning to his southern city of Xiamen since 2012, Lu Yanpeng has found a peaceful life after years of turmoil in Beijing. In the sweetness of the south, he continues to work on Open Air and, inspired by a Buddhist ceremony he attended in Yunnan, began Blossom with Buddha, a series where the luminous explosions of fireworks are superimposed on the figures. impassive images of the Buddha in vaporous landscapes.

Urban, provincial, mobile or sedentary, the photographers gathered in Suān Tian Kŭ Là take us on a journey through the vastness of their country or between the four walls of their studio. They confront us with certain aspects of reality – body, landscapes, objects – or, on the contrary, move us away from it by offering another image of the world and bringing the dream to the surface. Ten years later, the photographs shown in Angers have lost none of their narrative power and flavor. It’s up to the Mulhouse public to taste them now!