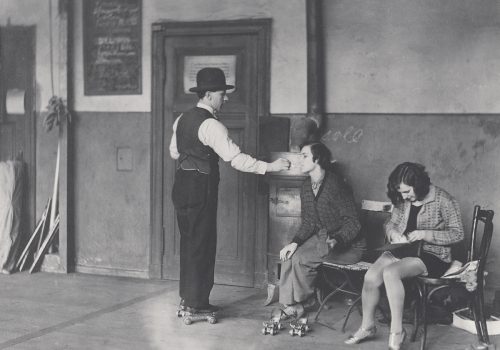 To begin the new 2020 exhibition season and on the occasion of the Berlinische Galerie’s show Umbo. Fotograf, Kicken Berlin is also presenting works by Umbo (Otto Umbehr) in its Kaiserdamm gallery. One of the most important avant-garde photographers of the twentieth century, Otto Umbehr (1902–1980) made an unmistakable mark on the new photographic perspectives of the twentieth century.

It was at the Bauhaus in Weimar in the early 1920s that Umbo received some of the first essential influences, from Johannes Itten among others. In the late 1920s in Berlin, he found his way to photography, guided by his mentor, the Dutch artist Paul Citroen. Soon, Umbo’s innovative portraits and unusual reportages for the Dephot Agency were causing a furor. In 1929, he participated in the Deutscher Werkbund’s pathbreaking exhibition, Film und Foto, which traveled from its start in Stuttgart around the world. Umbo survived the National Socialist period by retreating to magazine work. After the end of WWII and the destruction of almost the entirety of his archive, Umbo began to use his early experimental practices as a springboard for new artistic works, as during his US travels in 1952.

The visual stories Umbo tells are closely linked to his life’s path, personal preferences, and his activities. Multiple self-portraits of the artist relate his understanding of himself as well as the perceived image of himself as bohemian and photographer; Umbo is even capable of transforming himself into the renowned Charlie Chaplin before the camera. The reporter’s calling cards were decorated with the eye of the camera, and even after his studies, he remained a frequent visitor to the Bauhaus.

Umbo’s iconic motifs read like a concentrated photographic history of the avant-garde. A close-up of the female face belonging to Ruth Landshoff, Umbo’s most important model, actress, and writer; he portrayed no other person so often and diversely as her. The Spielhof, a view from a high elevation, which seems to create an abstract study of surfaces, lines, and shades of gray. Or the view across the Lietzensee lake, which, located in the gallery’s direct neighborhood, can be experienced almost entirely unchanged today.

Umbo’s reportages are image series that seem to speak, such as his observations of Mr. Adrian Wettach, who in 1929 transformed himself before the camera in to Clown Grock, or as in the surreally animated storefront mannequins that were published in the same year in the magazine Das Illustrierte Blatt. The fish-eye lenses of AEG’s Wolkenkamera gave Umbo new opportunities in the 1930s to test novel optical experiences both indoors and out.

With his reports for Spiegel and Picture Post in the postwar era, Umbo drew upon his trusted photo-reportage art, which considered the image equivalent to and equally valuable as text and which introduced its subject from various perspectives (The Lost Child, 1951). Umbo perfected the principles of New Vision for decades. On his last major trip, a tour through the United States for German journalists and photographers in 1952, he made pictures of the endless rows of products and industrial buildings, the expanse of the landscape, the cities’ nighttime skylines and their neon signs and advertisements as he had in Berlin.

In his later years, Umbo’s work was increasingly overlooked by the public, only to be rediscovered in the 1970s. Rudolf Kicken was the first to establish contact to Umbo, exhibit the work like those of so many other avant-garde photographers of the interwar period, and reissue key works. The 1980 Umbo portfolio by Galerie Rudolf Kicken collected the most important works by the artist; since his archives had been destroyed during the war and Umbo himself possessed only a few prints, his work was in this way made accessible to a whole new public. Rudolf Kicken’s stated intent, shortly after having met Umbo, was to track down forgotten works in photographic history and to connect them with a broad audience. He was able not only to locate the extant vintage prints by Umbo but also — as he had promised the artist shortly before his death — to maintain his life’s work, together with Umbo’s daughter, in order to give the entire body to a German museum. This goal has now been achieved.

Umbo’s artistic estate was acquired jointly by the Stiftung Bauhaus Dessau, Sprengel Museum Hannover, and the Berlinische Galerie, Landesmuseum für Moderne Kunst, Fotografie und Architektur in 2016. Following exhibitions in Hannover and Dessau, the Berlinische Galerie will be the third institution to display its selection from the group acquisition from February 20, 2020 under the title Umbo. Fotograf.