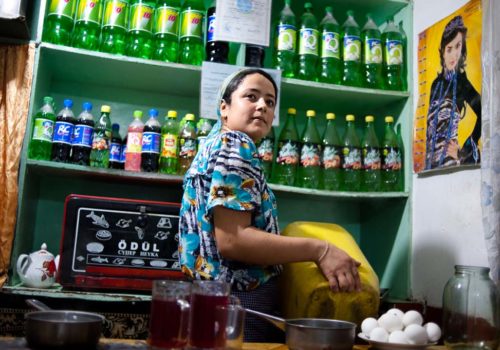 The best meetings are always in the kitchen. They are the best because they are most intimate and sincere. There are no unasked questions, but only timid responses. In the kitchen people talk about life, about men everywhere who the same, about dresses, about love stories, also the unrequited loves. There are no cultural or religious differences.

Tajiks, including Yaghnobi people, are Sunni, where a woman’s position is often dis- criminated against. Pamiris are Ismailis, they practice a progressive Islam often earning them the label heretic through this progress. Their leader is a liberal and educated in the west, a resident in Europe, known as Aga Khan the IV. “Here in the Pamir Mountains, women are free, they are not like other muslims who live only for cooking and cleaning. They go to school and then go to college in Khorog.” Ismaili women, who can be considered Islamic feminists are educated, some of them even work. Their position in society may have its differences, but could be looked on as equal to that of men.

Most marriages in Sunni Tajikistan are arranged. Polygamy is permitted up to a maximum of four wives. Tajiks get engaged at 18 and then marry two years later. In European culture, the young become very quickly independent from their families and young couples live on their own. Tajikistan is different. Becouse of difficult economic situation, a chosen one comes to live in the new family circle, so the deci- sion of who is to live under a common roof is also a family decision.

Love between married couples is considered not as important as loyalty to blood relations. A man’s world and that of a woman are clearly divided. Women take care of the household and raise children. It is instinctive. Men, if they have a chance to work, they work, but certainly never refuse a glass of vodka. When they drink they become rash, harsh, mirroring their surrounding word. They know that drinking, and behaviour it prompts is bad, so they keep their families out of this world. Maybe it’s why the worlds between men and women remain distant. The kitchen is a woman’s world.