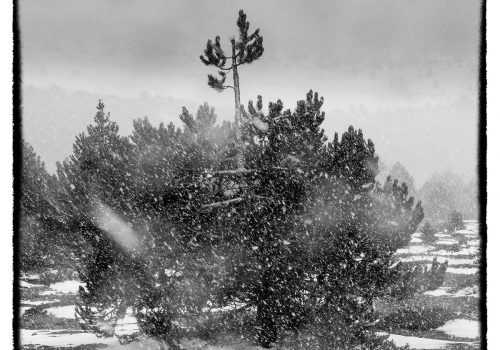 Of Corsican origin, his gaze nourished from an early age by the profusion of granite, Jean-Pierre has often magnified these hard rocks with strange shapes, which come in shades of gray and pink, omnipresent in his native south. Walking the mule tracks, wandering in the maquis, strolling and roaming along the creeks or walking in the mountains, gradually brought him closer this time to this limestone mass, that is Mont Ventoux. Indeed, each path to be taken on this bald mountain becomes a pretext for the act of photography. Whether it is a walk framed by enigmatic red and blue stakes, a hike on the west or north face, the photographer marvels at the multitude of facets this mountain offers him.

“Mon Ventoux” – that is the title of his portfolio – now reveals the evolution of his work. Jean-Pierre’s attraction to this sculpted and windswept mountain grows and is refined over time, like a love story. This intimate relationship, punctuated by numerous excursions, then leads the photographer to sublimate the minerality of the Giant of Provence.

With the bias of black and white, his photographic approach in no way defends Manichaeism in this vegetal nature reduced to its simplest expression among the scree. On the contrary, Jean-Pierre purifies his photos in search of the truth. From this a priori hostile environment emanates a particular universe. The photographer’s eye spots feminine curves in the midst of polar vegetation, circular, curled up, or on the lunar slopes sometimes covered with snow; his gaze tames the landscapes obscured by the immensity of the clouds and plays with contrasts.

When I walk with Jean-Pierre, I take a break and take the time, guided by his “clicks”. Take the time to simply look at what usually seems hidden from my eager eyes and which manifests itself in all humility, without any artifice. Together, to rediscover the poetry and beauty that this imposing mountain conceals within it. Petrarch himself said, at the top of Mont Ventoux, reading Saint-Augustin: “And men will admire the tops of the mountains, the waves of the sea, the vast course of rivers, the circuit of the Ocean and the movement of the stars and they forget themselves ”.