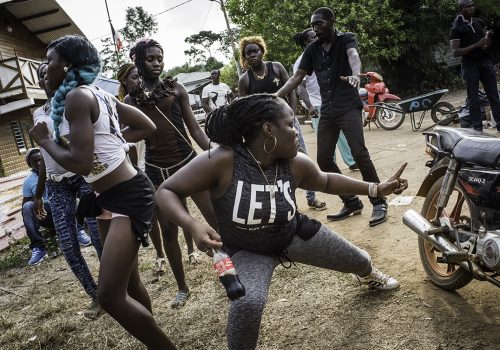 L’association Chercheurs d’Autres, anchored in Occitania and Guyana, presents at the Jardins du Muséum the crossed views of two photographers, David Damoison and Jean-Marc Aspe. This photographic exhibition is accompanied by a sound tour by Pierre Selvini and an educational booklet written by Juliette Guaveïa and Marie Fleury on the practice of Puu Baaka.

The Bushi Kondé Sama (Bushinengués or Black Maroons) live in the heart of the Amazon rainforest in French Guyana. Deported to the Americas in the 18th century, these enslaved men and women took refuge in the deep forest, especially on the edge of the Maroni. The descendants of the Black Maroons were a people who resisted the colonial army, they practice puubaaka, the lifting of mourning for each deceased. It is here the Alukus who honor their Gaan Man, the spiritual leader, whose mission is to preserve the balance of the community and maintain the link between the visible and the invisible.

In 2014 the Gaan Man Paul Doudou died, it is a historic event for the Aluku community which must honor his memory. It is the beginning of different cult and cultural times, the last of which is to allow the yooka (soul) of the deceased to join another world and to close this cycle with a Puu Baaka in November 2015.

It is an essential ceremony which constitutes a unifying and unifying element for the community united around this will to free itself from mourning and the will to honor the deceased. Immortalized by the objectives of Jean-Marc Aspe and David Damoison, the exhibition presents the different moments of this event. Located in the heart of the world’s vegetable gardens, it invites you to discover one of the little-known cultures of Guyana. It is accessible to the youngest and invites you to meet French cultural heritage through a multisensory experience.

Created in 2008, the association Chercheurs d’Autres aims to forge links between cultures near and far. Our action allows for better mutual understanding, it promotes equity and “living together” through a better knowledge of our respective realities. In 2015, members of the association traveled to Papaïchton to document the death of Gran Man Doudou, this photo exhibition is one of the results.

David Damoison, born in 1963 to a Martinican father and a French mother from Tarn, lives and works in Paris.

After taking photography courses at the École Boulle in Paris, he became an assistant in the workshops of the American Center in Paris. Alternately working with Jean Larivière and at the Pin-Up Paris studio, he was introduced to black and white printing.

From Cuba to Haiti, from Dominica to Guadeloupe or Martinique, from Congo to Mali, he has produced series of photos which have been the subject of various exhibitions and publications. His images question Creole and African identities across the territories visited. He has notably collaborated with writers such as Raphaël Confiant for “Les Maîtres de la parole Creole” (Éditions Gallimard).

Jean-Marc Aspe, born in 1982 in Germany, is a self-taught photographer who was trained by passion and first used photography as a tool for social action following a Master in Sociology. From the first pinhole models created for workshops, to his desire to illustrate the world he is discovering, it is the interplay between understanding reality and its representation that drives him.

He has carried out several artistic and socio-cultural projects between the French Metropolis, South America and Africa. He is particularly interested in the question of cultural identity and develops a social approach to photography based on encounter and participation. He works transversely between photography, screen printing and installation. Invested in the local cultural fabric, he developed the artistic collective “Frissons & Hanneton