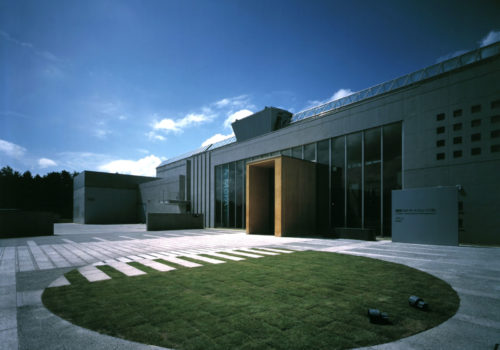 Tucked away in the hills of Yamanashi prefecture, the building of the Kiyosato Museum of Photographic Arts (KMoPA) sits like a giant Budhha among the evergreens. Made of poured concrete, this architectural wonder opened over fifteen years ago. Its director since is none other than Eikoh Hosoe, one of Japan’s most influential photographers. The museum’s collection boasts over eight thousand four hundred prints, and houses the biggest collection of platinum prints in Japan (their specialty). KMoPA also created a “Young Portfolio” program which accepts submissions of work by photographers 35-years-old or younger to be considered for induction into the Museum’s permanent collection.

The current exhibit : Great Spirit (from the Native American “wanka tanka”), regroups the works of Edward Sheriff Curtis, Kiyoshi Yagi and Hamid Sardar-Afkhami. Curtis prints of Native American Indians (platinum prints, orotones and photogravures), Yagi’s platinum prints of Inuits and Sardar-Afkhami’s photographs of hunters and shamans of Mongolia, all tell a tale of survival in the outdoor and a people’s resiliency to preserve their cultures and traditions in an ever-changing world. These images also tell the tale of the migration of Native Americans who moved from Mongolia, through Siberia and Alaska in prehistoric times, suggesting that the Japanese people are originally from the same race.

The brain-child of Hosoe and the museum’s chief curator Yuko Yamaji and her team, this exhibition is a lesson in environmentalism when the world faces daunting challenges in taming its development and protecting the planet for our children. The photographs all reflect the dignity of the people portrayed in them, their timeless beauty preserved for future generations to behold.

The work of Edward S. Curtis is for many the only visual record of the Native American population before it was rounded up and forced onto reservations. His photographic endeavor, to document all the tribes from Alaska to Mexico, was a race against time. Although he completed his project, Curtis had to recreate many traditional costumes from memory and staged many of his images. The edition of his books, containing photogravure plates, was never fully printed before he died. His platinum prints and orotones made in his studio are particularly stunning. KMoPA has a very strong selection of these prints on display here. His original large format photogravures are still collected to this day (although many modern re-strikes of lesser quality inundated the market when his copyright lapsed into the public domain). Each image harkens to a dream-like world where man and nature lived in harmony.

Kiyoshi Yagi, a japanese photographer, spends months at a time travelling to the far reaches of the arctic wilderness where small groups of Inuits still live off the bounty of the sea. His encounters with these remote populations, whose hunting instincts have remained intact over the centuries, are recorded in family or individual portraits, close-up shots of hunting tools and traditional objects, and exquisite barren landscapes. As a photographer more than an anthropologist, Yagi captures the lives of these people living on the edge of civilization. His portraits are straightforward and honest. His sitters don rich caribou or fox furs, like the last members of a lost regal tribe. Hunters pose with their weapons, indispensible tools to procure nourishment for their survival. Yagi’s platinum prints, made from glass plate negatives, are rich and evocative of the harsh life in the Arctic. A white fox frozen in motion, seems, in his own words “peaceful as if flying towards heaven.” The museum carefully matted his images to reveal the brushstrokes of hand-coated platinum on the outer-edges of each print. Yagi’s work was recently published in an elegant book titled “Sila”, which in Inuit means “everything outside”. The concept “Sila”, which governs the weather, the land and all living creatures which exist upon it, is also used to describe the world order. The occasional presence of contemporary objects (a boat, a modern rifle, a zipper on a parka or a pair of eyeglasses) divorce the images from any romanticism and anchor these survivors in present reality. Yagi’s photographs give us hope and convey the pride of the people he has met on his many journeys.

When living among the nomadic tribes of Outer Mongolia, Hamid Sardar-Afkhami, who was born in Iran, became even more conscious that westernized man has lost his sacred link with animals and nature. The hunters and shamans Hamid documented in his films and photographs have kept intact this link which connects them to their ancestors. Through their dreams and trances, the hunters and shaman communicate with the spirits of their forefathers who appear in the form of totemic animals (wolf, eagle, bear or reindeer) and bring them messages to help guide them in the present world.

While shooting his documentary films on the Kazakh and Buryat hunters or the Tsaatan (or Duhalar) reindeer people, Sardar-Afkhami recorded a series of iconic portraits of these people who have roamed the steppes of Mongolia free from Russian or Chinese influence for the last two centuries. While Curtis’ images of Native Americans bear a melancholic nostalgia, Sardar-Afkhami has managed to capture the dignity of these nomads whose ways and customs are also bound to disappear in the face of Mongolian urbanization. As Tsuyanqua, the 102-year old shaman riding a majestic reindeer explains : “We exist in relation to three things : nature, animals and the memory of our ancestors.”

A photograph can sometimes appear enigmatic, but we always end up believing it. These images, which could have been recorded a century ago, were created between 2000 and 2010. The decision to produce platinum/palladium prints was both an aesthetic and a philisophical choice for Sardar-Afkhami. The variety of the grayscale obtained using platinum salts is considered superior to classic silver gelatin prints. In addition to this, the lifespan of a platinum print guarantees it will be viewed two hundred or three hundred years from now, perhaps more. Sardar-Afkhami insures these people a life beyond their own and his.

The prints were produced by Salto, a laboratory based in Belgium. Unlike Yagi’s prints which were made directly from the negatives, the technicians at Salto can produce enlarged prints. By scanning the negatives and creating oversize inter-negatives they can control the balance and contrast in the different areas of the image. The result is a heightened reality which makes the photographs even more iconic.

What links the people depicted in the work of these three photographers is that they have no sense of geographical borders. The land belongs to us all and it is up to us to tend to it and the animals and plants which populate it. This enduring message could not be more potent today, especially after the catastrophe at Fukushima caused by the earthquake and ensuing tsunami last March.