Jan C Schlegel, It is all about the eyes 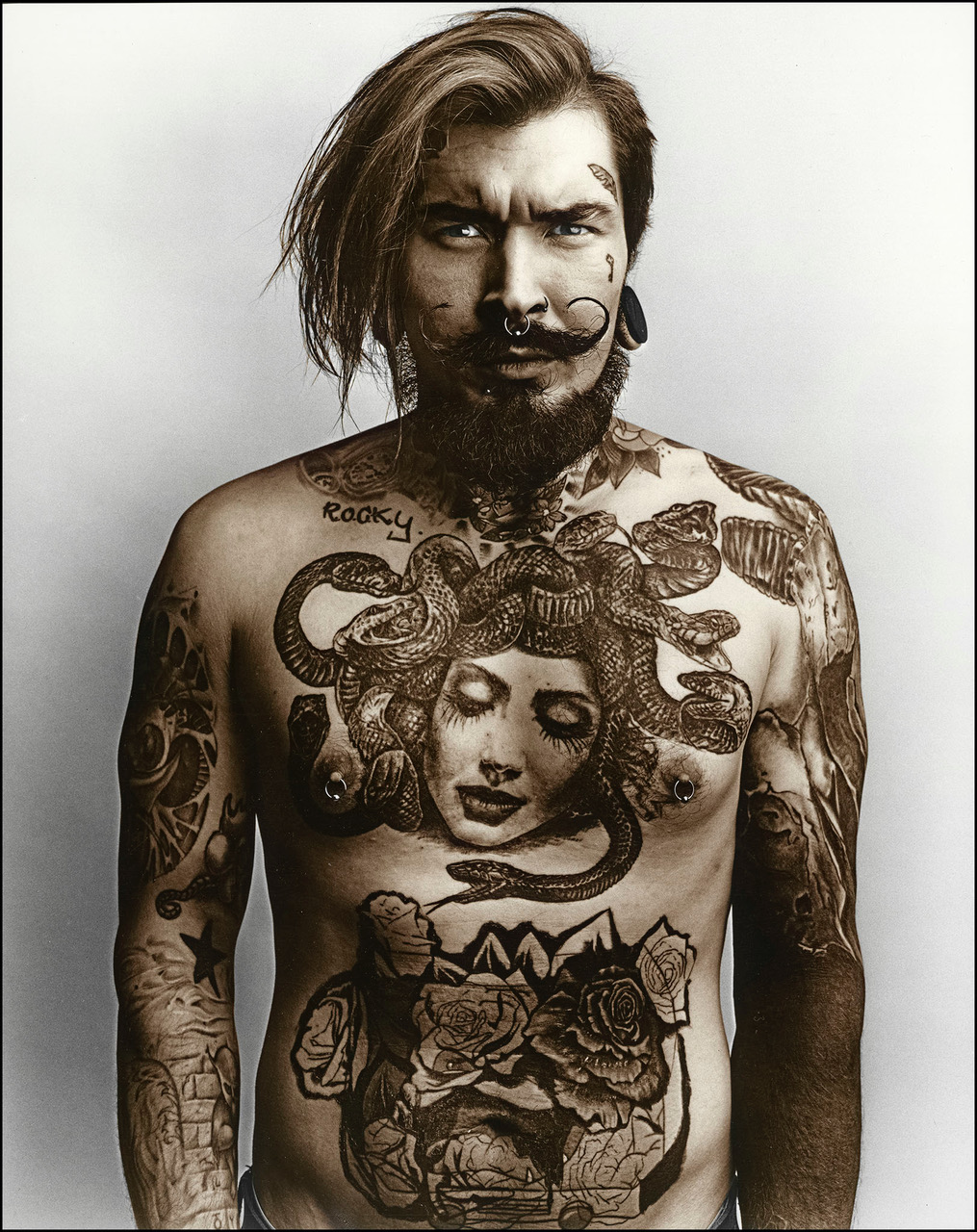 How is it possible that photography can move people to the root of their heart? Jan C. Schlegel manages to do that. His straight photography is naked in more than one meaning of the word.

This text could have had many titles. “Tattoos and urban subcultures” is perhaps the most obvious title. “From African tribes to the urban jungle” could have been another. “Finding solidarity in solitude” is yet another option. The many possibilities speak about an artist whose ability to trigger emotions, tell stories and construct narratives are manifold.

The obvious titles are seldom the best. And Jan C. Schlegel’s art is so strong that – in spite of all these options – I ended up with pointing at the most direct and sincere tool of communication we have as humans: Our eyes. A cliché says that the eyes are the mirror of the soul. The power of our eyes is best shown when another person looks you straight in the eye. That is the moment you might feel love. Or fear. Our eyes are powerful in every aspect of the word.

The choice of title points to the most important feature when Jan C. Schlegel’s art is concerned: His ability to use his eyes. He does that in a way that exposes people in a very personal manner. We, the spectators, are allowed to have a glimpse of the private personae, the real human being that hides behind a mask. It is those masks that make these models interesting. They are different because of their public appearance.

But the title is also talking about something else. Jan C. Schlegel encounters humans who are strange to us. They come from another culture or they look different in our eyes. On the street, in everyday life, most people would recognize them as strange. Some would say that they are threatening and avoid confrontation. Many men and women would be afraid to talk to them. We would easily have rejected their gaze and not made eye contact. But in Jan C. Schlegel’s pictures they look us straight in the eye. And thus a strange thing happens: Despite their differences they appear like someone you would like to give a hug and talk with for a long time.

The strange thing is that Jan C. Schlegel’s pictures remove the threat from the unknown. He became famous for his beautiful pictures of men, women and children from indigenous tribes in the deep heartland of Africa – and further on photographs of tribal people from different, distant parts of the world. His photographs picture them with pride and dignity.

With his new series “The Tribes of our Generation”, which is shown for the first time in the Oslo-gallery Willas contemporary, he takes a giant step towards his own culture. But the young women (and a few men) he portrays are as much strangers to most of us as the members of the African tribes. These youngsters are IT-girls and tattoo artists. They are idols of a new generation. They are stars on YouTube, Instagram and other varieties of social media. They are strangers to everyone who is not a part of that specific subculture.

These people are more alive on the internet than in real life. They are used to pose for the camera. They inhabit a make-believe-world where appearance is everything. That is why they fascinate us so much. They are not comfortable with the flaws and imperfections of everyday life. That is why they become so human in Jan C. Schlegel’s photographs. He has a special ability to make them relax in front of the camera. He makes them forget themselves. For a short period of time he makes them leave their appearance behind, standing naked and exposed to the world. They have their image intact, but we as spectators are allowed to enter behind their masks.

When you look at the pictures in Jan C. Schlegel’s new series, the model’s eyes are the last thing you think about. You look at their tattoos and piercings; the artistic hairstyles; the skinny, naked bodies; the details on their skin. You might even have a peek at their breasts and nipples. There is nothing wrong about that. Their nakedness is not sexual. It is only beautiful. And you might discover, gradually, that these people, the ones that many people avoid in the street, look nice and friendly. You experience that they appear fragile and naked, not only in the flesh, but also in the indirect, psychologic meaning of the term. It is all because of their eyes. That is the most important, special quality that turns these pictures into art.

The German artist Jan C. Schlegel (born 1965) made a remarkable debut in 2012. He already had a long career as a photographer. For many years the artistic side of his preferred media was something he did not think about, even less consider as an option for himself. When he made his debut as an artist, at Paris Photo in 2012, he had never heard of Irving Penn (1917–2009). The American photographer is one of the legends of the post-war era, and even if he is most famous as a celebrity- and fashion photographer, he is also a pioneer in the modern history of ethnographic photography.

It is this tradition Jan C. Schlegel has brought to a new level. He does the same as Penn when he places the people he photographs in front of a neutral background. They are in their well known, local community, but the situation caused by the photo-session does something to the subjects in front of the camera. The results were regarded as a sensation. The Lucerne- and München- based gallery Bernheimer Fine Art’s exhibited the pictures at Paris Photo. Suddenly Schlegel was ranked along with Penn and other great photographers. It came as a big surprise to the German photographer. Gradually he has found his way into the art-world.

It was his stunning pictures from Africa, of indigenous men, women and children living in remote villages and isolated tribes, that caused the attention. Jan C. Schlegel’s pictures were the result of a long lasting engagement that started ten years earlier, when he, after a drought disaster in 2002, volunteered to work with aid in southern Ethiopia. He was seduced by the people, and he returned several times in order to experience their warmth, their smiles and joy of life. But every time he returned to Germany and

developed his negatives, none of the photos reflected his experiences. The people he had photographed looked poor, weary and sad, and he did not understand why he was not able to catch the one thing that he thought was crucial to his experience – their zest for life.

To cut a long story short – after years of hard work Jan C. Schlegel discovered the key. He found a way to communicate with people from different cultures. He developed a method that is universal and humanistic, which works either he photographs indigenous people or IT-girls. It has nothing to do with language. It is all about trust, about using your eyes and body language to communicate. It is about having enough time and being able to see and respect people as they are.

If you add Jan C. Schlegel’s technical skills, you encounter an artist who has the rare combination of technical and aesthetic personality. He works with traditional black and white film in a large format camera, and nothing is digitally edited. He has developed his own method of toning parts of his black and white prints. His perfectionistic demands add a special quality to the handmade prints, and because of the special toning process each print has its own individuality.

This text could have enveloped a lot of different questions. It would – for instance – have been interesting to write about the psychological aspect of tattoos and the human urge to decorate our bodies and environment. Or I could have dug into the world of IT-girls and tattoos. I have spent time researching these things, and I have looked at several thousand pictures of tattooed people. But all the research turned out to be of less importance when I understood what is really important. It is all about their eyes. After hours of reading and watching I understood that I would never find what I was looking for on the internet. I had already seen it in their eyes. The solution to all my questions was looking at me from Jan C. Schlegel’s photographs. That is what makes him a truly human artist.

Lars Elton is a critic, freelance journalist and editor. He is the art- and architecture critic for the Oslo-based, daily newspaper Dagsavisen, and he has held the same position in Norway’s biggest newspaper VG for 16 years. Elton also writes about art and other cultural topics in a broad variety of publications.