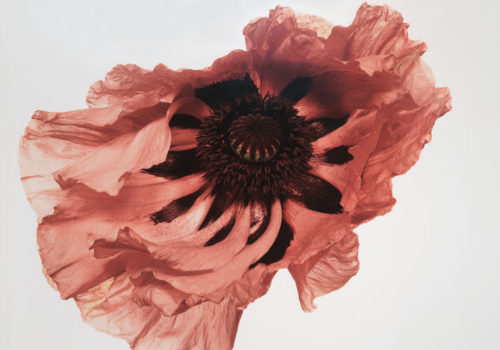 Irving Penn is the photographer who impressed me the most. He was the biggest perfectionist, the most intransigent photographer I ever met. I met him several times. The first was in 1975 for the 100th issue of Photo. Roger Thérond, head of the magazine back then, wanted a portfolio of Penn, Avedon and Hiro. The latter two considered Penn their mentor and agreed to participate if he would. Penn didn’t care for Photo—he thought it was a “girly magazine”—but I invited him to lunch at the Café des Artistes. I was paralyzed with fear, dumbstruck, and incapable of discussing his favorite subject: the printing process. So throughout lunch I talked about his younger brother, Arthur, the brilliant filmmaker, and his first film, Mickey One with Warren Beatty and the sublime Alexandra Stewart. Surprised and amused, he agreed to give me a portfolio of his work, which convinced the two others.

Then for two years I was on Penn’s blacklist. I had published a text on Doisneau, who had been Irving Penn’s assistant on his “Small Trades” series in Paris, shot for Vogue. Doisneau laughed about how different they were: Penn’s constant state of fear, how nervous he felt about the inability to communicate. “Penn worked with a view camera with a large metal viewfinder. Every day he’d bang his eyebrow against it and we’d have to bandage it up.” Penn hadn’t appreciated Robert’s recollections. Eventually I was invited back over to his studio. I came with a present, a copy of the first English translation of Camera Obscura by Roland Barthes, which I had been able to procure before its release. Three days later I received a letter from Penn: “Thank you. I didn’t learn much about photography, but I learned a little bit more about Naudet.” Forty years later, I still wonder what he meant.

Then there was Passage, the book published by Nicholas Callaway in 1991 (read more here). It took Penn four years and Penn exercised complete control over the process. Paris Match wanted to talk about it (read here). I went to see Penn, then Edmonde Charles-Roux, the postwar editor-in-chief of Vogue. The fabulous Edmonde told me an incredible story. She and Penn had been in Naples for a feature for Vogue. Penn was obsessed with the Palazzo, which had fallen into disrepair. He wanted to see everything, and he didn’t hesitate to climb over walls. When they came out, they were greeted by a cheering crowd of twenty people. Edmonde realized they all thought that she and Penn had been in there fooling around.

Not long after, Lisa Fonssagrives, his wife, the love of his life, died. A permanent grief came over the studio.