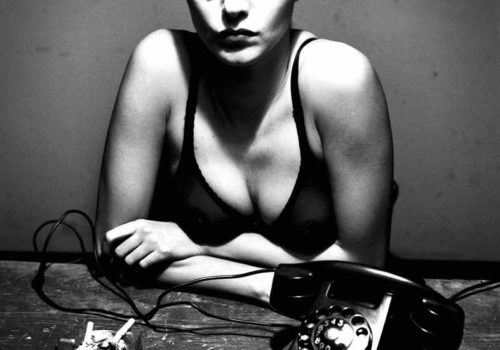 Since 1970, June Newton, widow of the legendary photographer of fashion and nudes, has also worked as a photographer, under the pseudonym Alice Springs. She and Helmut Newton have frequently exhibited their works together, especially their joint project “Us and Them”. In 2010, the first Alice Springs retrospective was hosted at the Helmut Newton Foundation; now, is her second retrospective, organized in 2015 by the Maison Européenne de la Photographie (MEP) in Paris. In more than 100 portraits of her fellow photographers – including Richard Avedon, Brassaï, Ralph Gibson, and of course Helmut Newton – as well as other celebrities such as Nicole Kidman, Audrey Hepburn, Christophe Lambert, and Claude Chabrol, Alice Springs succeeds in capturing not only the look of the represented, but also their aura.

Helmut Newton worked not only for fashion magazines and fashion designers. He also nurtured an interest in offbeat subjects, paparazzi pictures, police photography, and crime stories. In short,  “yellow journalism,” a mix of tabloid press and articles from the “Miscellaneous” section of daily newspapers. The eponymous exhibition “Yellow Press,” which was compiled and first presented by the photographer himself in 2002 at his former gallery in Zürich, is an eclectic mix culled from works realized between 1973 and 2002. It includes several photo series that were never previously published in Newton’s books, for example his series “Self-Appropriation,” a nude series about “Lolita” for Playboy Magazine, and a documentation of court proceedings in Monaco that he shot for Paris Match.

Once again, Helmut Newton’s wish to invite a photographer to exhibit in “June’s Room” will be posthumously fulfilled: Amsterdam-based photographer Mart Engelen will show more than 20 black & white portraits from the contemporary cultural scene, inspired in part by French film noir and including the likes of writer Michel Houellebecq, visual artists Gilbert & George and Julian Schnabel, director John Waters, and actor Willem Dafoe. Engelen came to photography in his early twenties; ten years later he launched his career as a freelance photographer with a series of commissioned works for Philips and Canon, as well as for magazines such as “Esquire” and “Vanity Fair”.