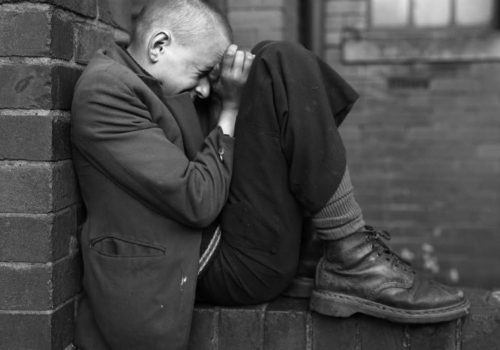 Chris Killip has just died. He was one of the great English documentary photographers. We published him several times. Photographer Soren Harbel sent us this text!

15 years ago, I bought my first photograph by Chris Killip. The photograph represents a time in history, where a committed, but impressionable 30 year-old Killip witnessed the bottom of an economic cycle in Northern England, when industrial manufacturing was dying, and poverty and despair were the order of the day.

I relate to the photograph in my own personal way, as I am pretty sure that the young man in the photograph is more or less my age. It is difficult to say exactly, as Killip has not said anything about his subject, other than naming the photograph: Youth on Wall, Jarrow, Tyneside, 1976. In 1976, I was 15 years old, much the same, I think as the young man in this photograph. My father always said that I should always remember that we do not pick where we are born. The Youth on the Wall grew up at a time when things were tough, factories shutting, unions being busted, and the industrial heartland of the United Kingdom gutted.

The young man is wearing a warn jacket – half a suit, I think, that has seen much better days – with pockets appear to have held clenched fists for a very long time, and perhaps a rolled up tweed cap. We can see a couple of stripes at the bottom of a sweater, which to me looks like part of a former school uniform. We cannot see what he wears under the sweater, but I would guess a not-so-white undershirt. His trousers are black and suggest that they have been worn a lot. Long wool socks connect the trousers that look shorter than they probably should have been at the time, with the massive worn boots, that seem impossibly big, or at least several sizes larger than what this otherwise gaunt young man should need. But what really grabs me, aside from the great photographic composition, are the clenched fists pressed against the young man’s forehead, and the lines emanating from his closed eyes, and across his forehead below the very short hair, no doubt cut quickly with a machine. It is as though the youth wants to will himself to disappear. To vanish from the trials and tribulations that form his seemingly endless reality.

The composition of the photograph reminds me of Ruth Bernhard’s nudes in boxes. It is as though the young man is making himself as small as possible to fit in a tiny space identical to the photographer’s frame. His clothes remind me of the grafters that would show up every day looking for backbreaking work in the docks of Liverpool, or Belfast. Men hoping to be picked by the crew bosses for a day’s work loading, or unloading ships by hand. Colin Jones’ work comes to mind. I can imagine that the youth has a rolled up cap in his pocket and could easily fit in among the thousands of day-laborers hoping to stave off the greedy landlord for another day and buy the basics for a simple meal for himself and his family. Of course, Killip’s youth is much to thin and weak to ever get called upon by the crew bosses.

Chris Killip passed away on Tuesday. He was 74. He is best known for his work in North England in the mid-1970s. He created a body of work that was collected in one of the most important photography books of the period: Inflagrante. Killip lived among his subjects, shared their loss and their despair and understood the context of his photographs – if not yet the importance – such that he was able to vanish into the background and show the raw reality of what was happening at a time in history that was cruel, hard, and for many an endless fight to simply survive.

I look at this photograph every day when I walk into my living room. It reminds me that I should take nothing for granted and should be happy to be alive, healthy and eager to take on the day.

I have been photographing with an old Leica for 30+ years and still shoot film. In addition to my own work, I have over the years, built a collection of mostly humanist photographs that spans a period from the 1940s through the 1980s. In the 1990s, I went back to university to study Art History with a specialization in photography, which has predictably resulted in a big collection of photography books.