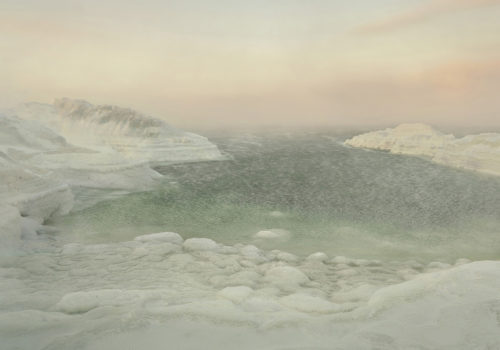 Evgenia Arbugaeva returns to her childhood in the Siberian tundra. From Kanin Nos to Enourmino, she takes us with a dozen Fine Art Prints on the shores of these hyperboreans lands.

“No one is here without a reason,” notes Evgenia Arbugaeva of the arctic lands that saw her birth – in Tiksi, in eastern Siberia, in 1985 – and which have for some time become pictorial material of her documentary work. From these seemingly austere regions, sometimes buried under ice and darkness, sometimes sublimated by the northern lights, this Russian photographer has brought out a thousand and one extraordinary details, sometimes bordering on magical realism, offering a new fertile point of view, of those distant lands frozen by stereotypes.

After the story of Slava Korotkiy, “a definitely happy man”, exhibited at the gallery in spring 2015, here are other Nordic adventures on the shores of the Arctic Ocean, in Kanin Nos, Dikson and Enourmino, a village where 300 Chukchi live and who, on a map of the world, faces Alaska unashamedly. There is never with Evgenia Arbugaeva the idea of ​​a scoop or something sensational, but the feeling, incredibly strong, of a beginning, as if humans and landscapes appear, literally, only to her. They are in front of us as they are in front of her, unfiltered, both real and unreal, close or distant. So this young couple in love, Evgenia Kostikova and Ivan Sivkov, posing with their dog Dragon, frail figures bundled up in the middle of a white space, their workspace, “they collect weather data”. Later, she will bring them apples, which will be delicately wrapped in newspaper, “as if they were made of crystal”.

In the village of Enourmino, Evgenia Arbugaeva will share Nicolai’s memories, his deep melancholy; learn how in this Chukchi community, rooted for centuries in the north of Russia, myths and legends persist vigorously; will come across walruses, stranded by the thousands on the shore for lack of ice, a darkly ostentatious spectacle of global warming, such a palpable  tragedy.

In Dikson, once the capital of the Russian Arctic, the intrepid traveler will face the ghosts of a city that was gradually abandoned after the collapse of the Soviet bloc. Emptiness, silence. And a biting cold, almost minus forty, pitch black. But what is she doing there? Nothing happens, she sees nothing. Until the day when, defying all expectations, the sky lights up, a promise of light, a blaze of colors: it is the waltz of photons, it is the aurora borealis. Flames, sparks, it looks like the sky is spitting fire… “Bathed in green light, adds Evgenia Arbugaeva in National Geographic (December 2020), the war memorial looked like Frankenstein’s monster who, after all, at the very end of Mary Shelley’s book fled to the remote lands of the Arctic ”. The Arctic as a romantic interval, why not?

“It is only here that I am myself,” concludes the photographer, who enjoys being on the edge of her childhood.

Evgenia Arbugaeva was born in Siberia in 1985, in the small seaside town of Tiksi, Laptev, where she lived until the age of 8. After graduating in art management from Moscow International University, she moved to New York. There she took documentary photography courses at the International Center of Photography.

In 2010, she decided to work on personal projects in Siberia. In her most famous series, she followed a young girl named Tanya, who lives in Tiksi and whose interests and sense of adventure resemble those of Evgenia at that age. To make these photographs, Evgenia Arbugaeva drew on caricatures from the Soviet era, which she found in children’s books in Tanya’s bookcase. “These books are beautiful and have a deep meaning. They are skillfully laid out, the characters are clear and bright. Their images convey a sense of wonder and naive idealism that has always captivated me. ” This series won her the Magnum Emergency Fund Award in 2012. She received the Leica Oskar Barnack Award in 2013 and the ICP Infinity Award 2015. In 2012, she received her first National Geographic assignment to photograph mammoth tusk researchers on the islands of Novosibirsk in the Arctic Ocean.

In 2013, traveling on an icebreaker, she met Slava Korotkiy, a meteorologist, the only resident of Hodovarikha, a weather station located on a small peninsula in the Barents Sea. The nearest town is an hour by helicopter, the only means of transportation. Evgenia Arbugaeva is immediately fascinated by Slava Korotkiy, who has lived alone for thirteen years. He is part of that generation of Polyarniki, the explorers of the north. At one time in the USSR, working in the Arctic was like flying to the moon, and these explorers were heroes just like the astronauts. This “Weather Man” series was exhibited at the in camera gallery in 2015.

In 2016, Evgenia Arbugaeva took us to Tanzania to the Amani nature reserve west of Tanga. A research center and botanical gardens were created in this area a century earlier by the Germans. Large sections of forest were felled and many species introduced. After World War I, the Germans were replaced by the British who expanded the activities of the laboratory and called on the local population to participate in experiments, both as assistants and subjects. Evgenia Arbugaeva is interested in the traces left by scientific research, which make this station a unique place where the memory of past practices is preserved.

In 2019 – 2020, thanks to a scholarship from the National Geographic Society Storytelling Fellowship, Arbugaeva visited three outposts in Russia’s far north: A Lighthouse on the remote Kanin Peninsula, populated only by the Guardians and their dog; Dikson, a now abandoned ghost town, which offered the grandiose spectacle of the Northern Lights during Arbugaeva’s stay; and finally the far-eastern region of Chukotka, where the Chukchi community lives, which still maintains the traditions of their ancestors, living from the land and the sea with walrus and whale meat as the main elements of their diet.

Evgenia Arbugaeva’s work is exhibited around the world, and is part of numerous public and private collections. Tiksi was the subject of a book published by The Eyes Publishing.