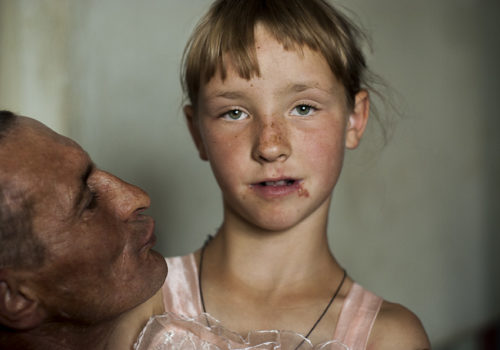 First female photojournalist in post-Soviet Georgia, Natela Grigalashvili, through her photographic work, demonstrates the unique value of Doukhobor culture and the risk of its demise.

Appearing three centuries ago in Russia, the Doukhobors formed a pacifist community that rejected the Church’s liturgy and opposed any civil government. Their history was thus made of persecutions, deprivation of liberty and deportations. Despite the difficult conditions imposed on them, they remained faithful to their convictions: exiles from Crimea in Georgia, they founded several villages in the Jakhaveti region. But to escape reprisals, a significant part of the community chose to leave for Canada at the beginning of the 20th century, supported by Tolstoy and his followers.

Today, many of the elders fear that with them the history and culture of the Doukhobors will disappear.

The Doukhobors, or “wrestlers of the Spirit”, believe in a divine revelation unique to each person, each man carrying within him a part of divinity.

“To no longer depend on the religious teachings of the Bible, their doctrine is transmitted orally from generation to generation through the Living Book, a collection, in the heart and memory of everyone, of hymns and psalms. The best known of them, “Be devoted”, illustrates their way of life of piety, courage, frugality, righteousness, humility, hope and faith. Carried by their will to live in accordance with Christian teachings, they refuse any form of violence, renounce force as a means of combating evil, do not meet the obligations of conscription and destroy, if necessary, their weapons. They are ardent pacifists who also ban all cruelty to animals: they became vegetarians and gave up alcohol and tobacco, which they believe are detrimental to well-being and spiritual development. ”

Extract from the text by Damien Bouticourt

Natela Grigalashvili was born in Khashuri, Georgia. Her childhood dream was to become a filmmaker, but photography turned out to be a medium more suited to her expectations. Introduced to photography in various studios, she established herself as a freelance photographer after several years. Since the 1990s, Natela Grigalashvili has regularly participated in various exhibitions and artistic projects. If her practice has long favored black and white, Natela Grigalashvili now uses digital cameras for color. Her series and long-term art projects focus on history and bear witness to the development of her country.

Damien Bouticourt is a graduate of French literature and civilization studies (DEA). He is currently director of the Maupetit bookstore and the Côté Galerie photo gallery in Marseille. He is the initiator of Natela Grishgalashvili’s visit to Marseille through her exhibition presented two years ago in this gallery.