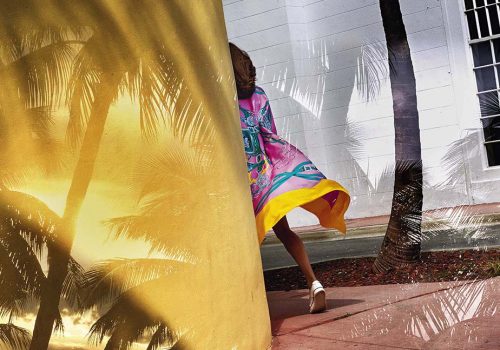 Belgium – An absolute reduction reduces the country to surrealism, chocolate and beer, and in recent years added the concept of fashion to this list. The city of Antwerp also wants a share of the cake, it is all too happy to declare itself the fashion capital of Belgium.

This year the second edition of the IconoBelge biennial was planned, and then – right, you guessed it – Corona. As an emergency solution, a smaller version puts the emphasis on Belgian fashion photography. The initiators went for a broad interpretation of the term and included glamour and portrait.

Central to the exhibition is the work of the regretted Marc Lagrange (1957-2015). He realized a series in the Handelsbeurs in which he drew inspiration from 1001 nights & the surrealism of Delvaux. The archaic architecture changes into an exotic palace filled with sensuality and eroticism.

Surrealism is also the keyword for Karel Fonteyne’s (1950) world. His series Fées en Diable (Vogue 1991) places his elegant models in a dilapidated factory. The use of color enhances the alienation process, or as Fonteyne puts it: “I usually don’t photograph what I see but how my mind reflects it”.

Color and elegance can also be found in the duo of artists Domen Van de Velde. Their images for Vogue Arabia show us how fashion photography can also help spread a message of equal rights.

In 2015 Harry Gruyaert (1941) photographed “Flanerie” in Florida for Hermes. What seems like spontaneous street photography are ingenious paintings of movement, of colorplay, and reflections.

The contribution of Lara Gasparotto (1989) and Laeticia Bica (1981) is a symbiotic collaboration. Gasparotto photographed fashion parades backstage in her familiar seemingly spontaneous way. She recently started adding elements to her images: painting and drawing on them gives the image a new dimension.

Björn Tagemöse is a Danish-Belgian visual artist, because his skills are not limited to photography and film directing. He shows two series Life & Funeral, in which the audience is actively involved in the staging in the last project.

The location – the Handelsbeurs is quite impressive. The ever-chauvinistic citizens of Antwerp would like to claim that it is the oldest stock exchange in the world, but they reluctantly admit that that honor belongs to Bruges. Antwerp can be proud of the fact that securities were continuously traded at the Handelsbeurs location from 1531 to 1997. The exchange was not only one of the oldest, but also an example for London (The Royal Exchange), Rotterdam and Amsterdam.

During its history, the building has been rebuilt several times, and the current version dates from 1872. It is a late neo-gothic gem, the enormous glass dome was realized in composite construction. The load-bearing elements are in iron, which, 20 years later, became one of the essential characteristics of Art Nouveau. That is precisely why the building is special, the style refers to the past, but the latest technologies were applied during construction. Technology is a constant, during the restoration that was completed this year, the entire building was lifted! You can find more about the building’s origins up to its restoration in a well-illustrated publication, which also contains the images of Marc Lagrange.

If you expect a thorough introduction to the mentioned photographers, the exhibition will be a disappointment, if you go for a first introduction to a wide selection of photographers with very different perspectives in a beautiful setting, you will appreciate the initiative.

Can be ordered through