Grégory Herpe : From Banksy to the Berlin Wall 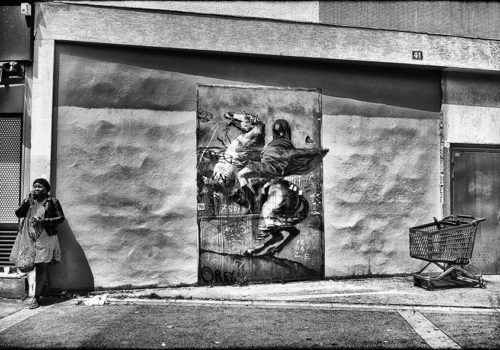 The City, Street Art, and Me …

As soon as a new fresco or an original collage appears on a wall, professional or amateur photographers immortalize it for social networks, a press article or a book. Always in color.

Because street art is also this abundance of colors in the street.

I have been passionate about this artistic movement for a good ten years. For me, this discipline is complex and rich, because it is social, cultural, political, creative.

I travel a lot to make my photo reportages and while walking randomly in the streets, in Barcelona, ​​Paris, or Belfast, I began to photograph the works of these very special artists.

But with my style, without changing the way I photograph the things around me: in black and white.

First, because there is no reason for me to impose color on myself, and secondly because my goal is not to take pictures of other people’s works. No…

These photos are images of streets, and in the street, nowadays, there is street art.

This art is part of our lives, of our cultures, and I want to show what our world has become.

I’m not making a photo of a Banksy collage; I take a street photo where there is a collage of Banksy.

For me, this work is a triple encounter between a city, the imprint that street artists have left there, and my photographic gaze.

In this exhibition, I wanted to show a panel of what can be found exclusively in Europe.

Born in Paris in 1969, Grégory Herpe works and lives between France and the Netherlands.

Photojournalist for the press agencies Sopa in Hong-Kong and Polaris in New York, he devotes himself above all to art and has been exhibited on 4 of the 5 continents, in galleries and museums: European Parliament, United States, South Korea, India, Nigeria, France, England, Belgium, Netherlands, Norway, Switzerland, Spain, Portugal, Germany, Italy, Greece, etc.

His photographs are also part of the private collections of several European and Asian museums, as well as that of HSH Prince Albert II of Monaco, or the Vittorio Emanuele Foundation in Italy.

He works regularly with NGOs to talk about their actions, as well as for French and British magazines.