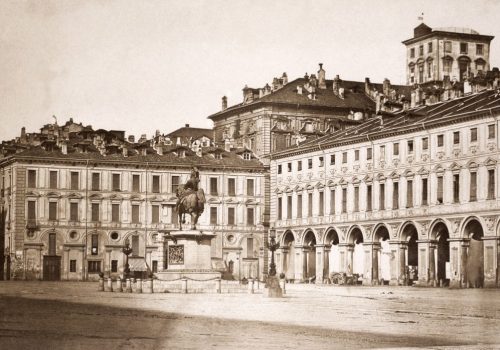 Phenomenology of the catalogue

Up until a few days ago an exhibition catalogue would have been considered just as the catalogue of an exhibition. A catalogue intended to be flipped through and put in the bookcase. Indeed, what once seemed normal, looks like an event now. And the sense of catalogue itself changes, too. It becomes an “event” able to ideally take us out of the walls of our house at this particular time. I’m just looking through L’altra macchina. Un industriale biellese e l’affermazione della fotografia in Italia / The Other Machine. An Industrialist from Biella and the Affirmation of Photography in Italy, a little volume (21x21cm) that encloses the history of photography shortly after its birth, seen through the sensibility of one of its protagonists, Giuseppe Venanzio Sella.

The exhibition of the same name, organized by Fondazione Sella in Biella (Piedmont), was a precious gem, thanks to the materials conserved in the Foundation archives and we hope it will be soon exhibited again. Indeed it will be a moment awaited by those who whish to see de visu how photography has been developing since its origins. The exhibition, in fact, deals with Giuseppe Venanzio Sella photographic activity and his contribution to the photography in Italy thanks to his images and the manual he wrote, published in 1856.

In the Kingdom of Sardinia there was keen attention to the new technology/art: right from October 12th, 1839, the daily Gazzetta Piemontese carried the headline First “Daguerrotipo” in Turin, just a few months after its official presentation in France. It wrote: “Mr. Enrico Jest, of the Royal University of Turin, his son and Mr. Rasetti, managed to create a daguerrotype camera and to shoot a photo”. Jest referred to it as Dessin Photographigue d’après le procédé de M.Daguerre, as seen in the exhibiton. The show also included a precious series of daguerreotypes, some calotypes by W.H.F. Talbot and a rare albuminata glass plate (reproduced on page 49 of the catalogue).

“Giuseppe Venanzio, who shared his interest for photography with his brother Quintino (a statesman and scientist), used to be in Paris in 1851 for several months in order to deepen the knowledge of the dyeing techniques (because of his work in Biella) as well as photography. He was in Paris with his wife Clementina – who later worked closely with him in his works on photography – and there he attended Friedrich von Martens’ and Charles-Henri Plaut’s ateliers”, Angelica Sella, president of the Fondazione Sella, says.

As he got back to Biella he payed close attention to photography, prortraying his relatives and friends and taking photos both of his factory (in stereoscopy) and of monuments in Turin and Biella, as documented in the catalogue. The show also featured the correspondence between Venanzio and the Lumière brothers and the Plico del fotografo, ovvero Arte pratica e teorica di disegnare uomini e cose sopra vetro, carta, metallo ecc. col mezzo dell’azione della luce, the earliest and most complete treatise dealing with photography in Italy. It included physical and chemical procedures as well as composition tips.

Both the exhibition and the catalogue show the wonder and the complexity of the new technique. Would you get a chance to visit the Foundation headquarters, you will be surrounded by a special atmosphere, evoking the images within the catalogue, that allow us to open up a window in time. They are part of the amazing Fondazione Sella archives, collecting many hundreds of thousands of glass plates, prints, autochromes, not to mention the fonds devoted to mountain and ethnographic photography, like the Vittorio Sella’s one, to cite just one.

L’Œil interviewed Angelica Sella, president of the Foundation, asking her what’s the very meaning of such an archive today.

“It’s an institution whose aim is preserving the memory and the historical and moral heritage of people, families, companies, institutions. It duly preserves everything about the subject in question. Our idea is having a global perspective on the subject”.

Why is it so important?

“It’s the comprehensiveness of documents that are worths while, and visual documents are as significant as the written ones. Our present world needs an immediate direct communication like visual communication . Since its birth in 1980, the Fondazione Sella has been focusing especially on the photography issues, as it already had a role in the preservation of significant archives like the ones by Vittorio Sella and of the Istituto di Fotografia Alpina. At its very beginning, the central core of our archive consisted of the Sella family’s one, that had been collected since the XVII century and organized by Quintino and Giuseppe Venanzio Sella in the XIX century. Then this original core acted as a magnet which attracted similar significant realities”.

The catalogue published by Fondazione Sella, (like the exhibition) is curated by Pierangelo Cavanna, in collaboration with Peppino Ortoleva. It is coordinated by Angelica Sella with iconographic research by Andrea Pivotto.

L’altra macchina. Un industriale biellese e l’affermazione della fotografia in Italia / The Other Machine. A Biellese Industrialist and the Affirmation of Photography in Italy