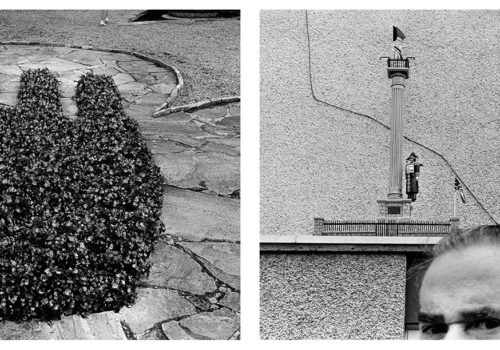 Describe EVERYTHING – Text by Gilles Peress

In Whatever You Say, Say Nothing I have attempted to describe time in the helicoidal structure it assumed during the Troubles in the North of Ireland, where today is not only today but all the days like today; days of violence, days of marching, of riots, of unemployment, of prison, of mourning, and also days of “craic” where you try to forget your condition. (I use where, not when, to refer to these days, because for me they are spaces, not durations.) As such, the organization of the book into 22 semi-fictional days is derived from this intent. I claim the term “fictional days” not sheepishly, but as a revindication of the turbulent structure of memory as a building block of history during such an intense period. So do not look here for journalism or photojournalism (in which I never believed), wrapped in its self-serving ideology of “objectivity,” nor even for the righteousness of documentary work. The goal here was much more narrowly focused on an unachievable representation of minutiae, and the result cannot cloak itself in the sanctimonious virtuousness of such genres. Do not look here either for “Art.” My intent at the time was simply to explore what Roland Barthes called the “savage nature of photography.” I wanted to do work that is beyond categories, in a no-man’s land beyond labels. What I wanted, in the end, was to make a book, which like all books is essentially a gesture, akin to a performance. Books are like children at birth, and you must let them be, without too much intervention, lest you smother them, or kill them with “death by design.”

I wanted this book, the book that never was, to be about issues of perception, about the simultaneity of perceptions. I wanted to describe EVERYTHING — and yes, maybe this was a folly doomed to failure. I tried every possible visual strategy known to me at that time to DESCRIBE: I tried multiple camera angles, camera formats, day, night, rain and sun, and I went back again and again to the same places, the same street corners over and over, hundreds of times over the years. It wasn’t doubt about photography that drove me — I doubted perception. I doubt everything so why not perception above all, the murky moment of overlap between the inner and outer world? So I photographed everything, chasing perception: the food I ate, the drinks I drank, war, peace, torment and stillness, the adrenalin moments and the most boring ones, the rituals of Taigs and Prods in a war rationalized by the cynical British concept of “acceptable levels of violence,” the rich and the poor, the skies and the trees. I catalogued the forensic remnants of invariant restricted codes, symbolic shards of invented traditions. At that time, the process was that of a perception machine, and by extension may have become a time machine per se: The chase revealed the time of lives passing, the time of lives wasted, lives crushed by the absolute matrix of History with all its cogs and gears until crunched and reduced to dirt. Yes, I was photographing that dirt, remnants and fragments of lives.