Gilles Berquet : I’ll Be Your Mirror 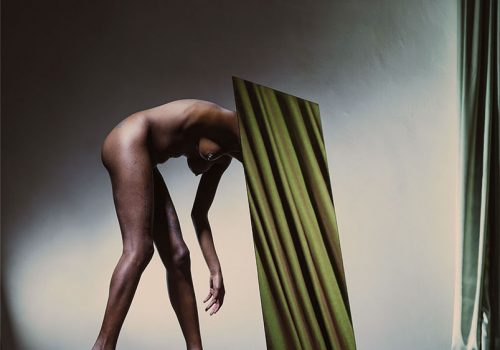 For his first exhibition at the Galerie Bertrand Grimont, Gilles Berquet looks back on several years of work and offers a serial exhibition with a touch of surreal humor. And if his exhibition takes its title from a famous song of Velvet Underground (I’ll Be Your Mirror, 1966) evoking an unconditional and submissive love – the word mirror here is plural.

From the very beginning photography has been tempted by series, order and classification. It is enough to think of Alphonse Bertillon who, at the end of the 19th century, saw in it a systematic and scientific means of controlling the population (criminal or not). Then you have to admire the works of Bernd and Hilla Becher who, for decades, systematically used the same photographic protocol to keep an image of water towers, blast furnaces, trestles and other endangered industrial heritage objects. . Finally, closer to us, Hiroshi Sugimoto or Taryn Simon like series, images that are repeated from one to the other while being inhabited by differences. Like them, Gilles Berquet has been using a protocol since 2007 that allowed him to start his sessions with a joyful ritual and, at the same time, to create an infinite series of identical but always new and meaningful images.

The so-called protocol series is either a clearly defined system that is put in place and is always repeated in the same way. Thus, at the beginning of each session with a model, Gilles Berquet photographs the woman, standing in front of a vast curtain and illuminated on both sides by two fluorescent industrial tubes. Apart from a pair of high-heeled shoes (which, as we know, give a certain shape to the leg, define a posture and also recall the fetishist works of the photographer), women give especially to see their nakedness and freely choose their pose . For this exhibition, Gilles Berquet chose 30 of these photographs under the title of La Femme Idéale (2007-19). But the photographer’s factory secret is mostly here in a mirror behind him when he presses the shutter button. So, most of the time, the model looks at and controls, observes and even if we can believe that she fixes the objective and our eyes – it is with her own reflection and its own inverted image that she communicates. The framing remains the same and the photograph, once integrated into the series, can not be dated. We then move from one to the other, more attentive than ever to physical and emotional differences.

We are tempted, as in the case of Bernd & Hilla Becher (and, what is more, Berquet resumes their method of hanging, in a tight grid), to observe these images as a whole. Then we study the portraits one by one. Here there is a large scar, a more elaborate figure, a tattoo somewhere  … But there is a constant: the pride in the pose of these women whose body, with a minimum of make-up and without any retouching, sometimes betrays the traces of years. Envy has come to us to look at different character traits (timidity, delicacy, insolence) as these images seem natural. Much more natural than Bertillon’s and his contemporary avatar: the biometric portrait, much more natural than any photograph printed in a fashion magazine. This is an invitation to compare but where Bertillon wanted to be scientific, Berquet is sensitive and let the models express what they carry in them.

Photography – until the advent of smartphones and other digital machines – was a mirror affair. At the end of the 1930s, the invention of Single Lens Reflex was a revolution: what the photographer sees in the lens will be the exact framing of the final image. To do this, a mirror flips inside the camera, sometimes sending the image to the photographer’s eye, sometimes to the negative and bombarding it briefly with light. Berquet was interested, in another series of photographs, objects struck with alignment (2007-12) by technological products of the twentieth century rendered obsolete by the advent of digital. The title of his exhibition borrowed from a Velvet Underground song is not just a nostalgic reminder of the 1960s or a metaphor for the role of the photographer in front of his model: it makes sense here in the omnipresence of mirrors in his studio, his works, his apparatus as in the culture of the selfie and his ancestor the Photomaton. Thus, in the small installation film AppleBlad (2019), an iPhone shows a video reflected by the interior mirror of a mythical Hasselblad camera little by little replaced by new technologies. Finally the cameras are also present in two images in tribute to the portraits of Marilyn Monroe made by Bert Stern in 1962 or when some models take a mirror in their hands and then reflect the photographer at work, his camera in his hands.

Of course, Gilles Berquet’s muse and companion, Mïrka Lugosi, could not be absent from this exhibition. She finds herself first in the company of Tessa Kuragi and strange mushrooms too beautiful (and probably too poisonous) to be true but, especially, for a single portrait that observes us and follows us during our visit. Either the photograph of a framed print hanging on the wall of the workshop, image again printed and framed and hung this time in the gallery. Because, if photography is a mirror image, it is also a story of framing, shadows, light, print, grain, shadowing, possession, look and – finally – memory. .

Gilles Berquet : I’ll Be Your Mirror