Best Of 2021 : Gérard Bonnet : François Mitterrand and the 103 peasants of Larzac 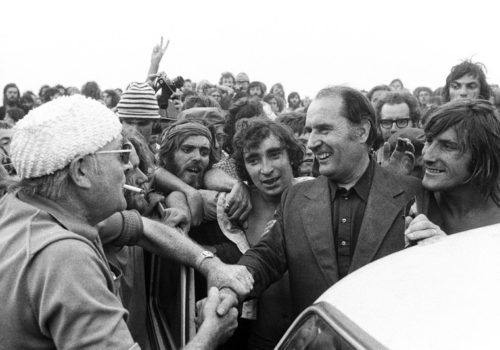 Sunday May 9, 2021,Tv news at 1:15 p.m. of France 2 presented by Laurent Delahousse, after a hagiography on François Mitterrand as a farmer at Latché his country house in the South of France, there is an evocation of the visit of the candidate for the Presidency on the Larzac plateau which allows us to discover a photographic report almost unpublished by Gérard Bonnet. To be seen for the pictures!

On the eve of the national holiday of May 8th, France 2 made a series of reports to the glory of the former President of the Republic. After an evocation of his life in the Landes, Yvan Martinet and Ciryl Zhâ made a 54-minute documentary on the struggle of the peasants of Larzac.

The Larzac movement began in 1971, when Michel Debré, then Minister of Defense under Georges Pompidou, decided to expand the military camp located on the Larzac plateau in Aveyron. The local peasants, rather conservative and Catholic, were not a priori against it. But when the military decided to buy back their land at the cost of the latest appraisal, the tone rose. On the one hand because the prices assessed for inheritance purposes are often reduced, on the other hand because the government had nothing but contempt for these women and men “who live as in the Middle Ages”.

Parisian contempt for “hicks” will weld them. Their refusal will generate a movement of non-violence which will seduce the ” 1968 youth” in search of new areas of struggle. On the weekend of August 15, 1974, tens of thousands of young people, bearded, hairy converged on the Larzac plateau. Joining the 103 peasants concerned by the extension of the military camp, came a  mix of Trotskyist militants, Maoists, anarchists, conscientious objectors, MLF feminists, FHAR homosexuals, Occitan nationalists, etc.

François Mitterrand, who took care of his “leftist” profile in view of the presidential election, decided to come incognito on the Larzac plateau. Marseille photographer Gérard Bonnet, who worked for Agence France Presse (AFP) and Agence de Presse Liberation (APL), was on site.

When the leader of the Socialist Party arrived, he miraculously finds himself at the place where his car stops. It is remarkably placed. The first photos show young people warmly welcoming François Mitterrand, but things quickly take a turn for the worse. Anti-colonialist activists remember the odious role played by the Minister of the Interior and of Justice during the Algerian war under the Fourth Republic.

Little by little, the stampede grows, spit and pebbles fly… The peasants of the Larzac who do not want the incident to degenerate into lynching, organize themselves as security personnel around a François Mitterrand described by witnesses as a frightened man. In Gérard Bonnet’s photos, we can clearly see that the crowd is hostile.

In the France 2 documentary, when President Mitterrand returned to Larzac to have lunch with those who had protected him, he confided that his suit was so damaged that his cleaner told him to throw it away.

See the articles on Gérard Bonnet