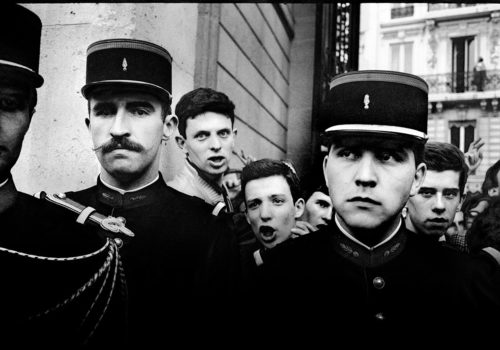 For the second time, Galerie Thierry Marlat is dedicating an exhibition to the photographic work of photoreporter Yan Morvan.

This exhibition brings together some thirty vintage silver prints, in black and white. All prints are dated 1981.

In 1981, Yan Morvan was 27 years old. He is a young photojournalist and works for the Sipa Press agency which assigns him to cover a year in France rich in political, social and cultural events.

40 after the historic year that 1981 represents, Yan Morvan’s photography, taken from its journalistic context, stands out as an intense photograph imbued with an aestheticism specific to its author whose photographic work deserves exhibition.

“Yan Morvan is undoubtedly one of our last great photographic reporters, in the best sense of the word. (…) Perhaps it is due to the past time – forty years -, to black and white, to the empathy of the gaze – we can even speak of kindness – which tells, and does not divide, who antagonizes nothing, and who will allow you to meditate, between nostalgia and hope. ” – Hubert Védrine

Yan Morvan: an aesthetic of the “border-line”

Throughout his career as a photojournalist, Yan Morvan portrayed his contemporaries and their battles, not at the heart of the apparent conflicts that current affairs strive to relay, but at the heart of their intrinsic worlds. This attachment to common uses and local landscapes is reminiscent of the extraordinary work of other documentary photographers, such as Robert Frank or Walker Evans.

Whether caught up in conflicts that transcend them or living with their own organic demons, the faces and silhouettes photographed by Yan Morvan escape the political or territorial organization that seeks to impose itself on them. His photography is devoted to “to the aside”, where humans ireveal themselves because they depart from the common sense that we would like to give them.

It is this aesthetic of the “border-line”, that of the historical emergence of unplanned local forms, that the photographic image of Yan Morvan’s documentary style seems to be able to implement, better than any other medium.

Few photographers have managed to place themselves in this sensitive place.

A tireless observer of the material conditions of existence of his contemporaries, Yan Morvan is a “live” portrait painter, a major figure in contemporary French photography through his humanist reach and his artistic singularity.

Yan Morvan’s photography is the result of a collective history that always seeks an objective and be truthful witness. The photographer is keen on history. He adopts a posture ultimately contemplative of his own time, to place himself at the service of this cause that represents objective, neutral documentation. Wouldn’t we be in the presence of a vernacular style, capturing the faces and bodies of people, famous or anonymous, like so many iconic figures who populate the collective imagination and in a way govern it.

“You don’t want your work to stem from art; you want it to start with life, and it’s in the streets now. I am no longer comfortable in a museum. I don’t want to go there anymore, I don’t want to be “taught” anything, I don’t want to see “accomplished” art. I am interested in what is called the vernacular ”Walker Evans, The Secret of Photography. Interview with Leslie Katz, Éditions du Center Pompidou, 2017, p. 35.

It is with an aesthetic of common or singular experience, especially not directed by an organized desire for meaning to be given, that Yan Morvan constructs his vernacular landscape uniquely governed by a deeply human, deeply local reality.

Yan Morvan: the question of the portrait

Yan Morvan is not primarily a portrait painter but he has a practice of portraiture “on the spot”, in movement, in spontaneous or arrested confrontations, which is indeed a French variant of American “street photography” of which Robert Frank was the leader.

Like Walker Evans in 1930-1940 in his first social reports for the Farm Security Administration, Yan Morvan began his career in the 1970s with a social photography that seeks to archive, like an anthropologist, tirelessly, the human being at the heart of upheavals. political, economic, cultural and obviously social of his time.

During the presidential campaign, under the leadership of Jacques Ségalat, boss of the Euro RSCG agency which carried out the entire advertising campaign for François Mitterrand, photography established itself as the vector of modern communication. The portrait is worked on, not to say drawn up, but it is also captured on the spot by the photoreporters who provide the raw material for the narrative process. The era is anchored in an era of slogans and images.

The election of François Mitterrand and the first year of the seven-year term which began in May 1981 marked the end of French conservatism and the end of some form of international conservative certainty. It carried the hope of a new, more humanist, resolutely modern society, with a powerful cultural overhaul, and effective and fruitful social thought. On May 10, 1981, a fraternal historical momentum brought together around the Bastille as in most of the squares in French cities a whole range of genres, generations split since 1968, cultures that seemed unable to be brought together. On the side of the opponents, there is amazement and even disbelief.

The turning point represented by the year 1981 with the abolition of the death penalty, the reimbursement of abortion, the inauguration of the TGV, the law on nationalizations, the establishment of the ISF, the birth of free radio stations ,… Deserves a focus forty years later when the world is reorganizing itself around a pandemic and discussing its orientations and its future.

40 years after the historic turning point of François Mitterrand’s election, Yan Morvan’s photographs reopen awareness of an important historical event and help give it the necessary weight to understand it.