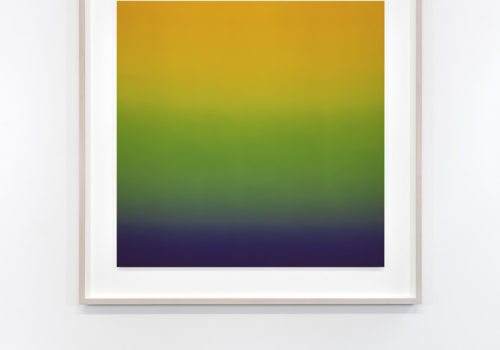 “Isn’t art used to collect what fall between the cracks, now that scientific knowledge has got rid of god?” Hiroshi sugimoto

The Marian Goodman Gallery presents Theory of Colors, Hiroshi Sugimoto‘s third solo exhibition in Paris, where we can discover his new series “Opticks”.

The “Opticks” (2018) are the photographic transcription of colors revealed by the passage of light through an optical glass prism.

The title of this series refers to that of Isaac Newton Opticks’ treatise, published in 1704. Fixed on Polaroid film, the colors of each photograph reflect the attention that Sugimoto pays to the most subtle shades of the rainbow. , but also and above all, to those which embody a transition, which appear to be mixed or whose determination is not easy. “By observing the glow of prismatic light every day, I conceived doubts about Newton’s seven-color spectrum: yes, I saw his red-orange-yellow-green-blue-indigo-violet patterns, but I just as well discerned many more intermediate colors, nameless hues, from red to orange and from yellow to green.” Says Sugimoto.

If he is a reader of Newton, Sugimoto is also of Johann Wolfgang von Goethe. The latter, in his Treatise on Colors (Zur Farbenlehre) published in 1810, describes the phenomenon of light from a more sensitive point of view. Following them, Sugimoto developed a more poetic and metaphysical dimension of the perception of colors “beyond the arithmetic and dispassionate gaze of Newton or the sensual reflection of Goethe, I wanted, with my camera, to tend towards an intermediate path”. Thus, the artist recalls that in East Asian Buddhist doctrines, the word “color” refers to the material world while its Japanese transcription means both “empty” and “sky”. “In short, explains Sugimoto, if the visible world of colors is essentially empty, then this world is as intangible as the color of the sky.”

As often, Sugimoto works in synergy with random environmental data that makes each shot unique. “I got up every morning at 5:30 am. Above all, I was looking east at the beginnings of a poignant day on the horizon,” he explains. “If the weather was clear at dawn, I would look at the ‘morning star’ shining on the right side above the horizon line. According to the brightness of Venus, I was evaluating the purity of the air that day (…). It was only then that I was getting my old Polaroid ready and starting to reheat a film kept in the chill of long winter nights,” he writes.

In his Tokyo studio, which Sugimoto patiently designed as an observation post, he uses a device equipped with a prism through which light passes. By striking a surface at a certain angle, its color spectrum can be decomposed, providing a color continuum that makes it easy to fully explore a particular shade. “I could thus divide the red into an infinite number of reds. Especially against a dark background, each red on its own looks wonderful. In addition, the colors are constantly changing.” Explains Sugimoto.

The experience of retinal persistence after looking at a single color for a long time, impose the human eye to see an afterimage of the opposite color for a few seconds while looking elsewhere, this inspired Sugimoto to think about emptiness and its opposites, enlightening for the understanding of his work: “… Look at this world for too long and we will see an inverted world. This makes me all the more think that “the form is empty” and vice versa.”

The Odawara Art Foundation was established in 2009 to promote the spread of Japanese culture while adopting an international perspective, producing and promoting theater, from classical repertoire to avant-garde performing arts. The Enoura Observatory site, designed by Hiroshi Sugimoto himself, opened to the public in October 2017.

The Hiroshi Sugimoto catalog. Post Vitam, published in April 2020 on the occasion of its exhibition at the Kyoto City Kyocera Museum of Art, will be on sale exclusively at the Bookstore. As well as Snow White, a luxurious edition dedicated to his “Theaters Series” signed and numbered  (400 copies) and the book Hiroshi Sugimoto. Seascape, published by Xavier Barral.

Hiroshi Sugimoto was born in Japan in 1948. Since the 1970s, he has mainly worked in photography, but his multidisciplinary practice includes the production of performative and architectural works. His work questions time, empiricism and metaphysics. Sugimoto’s works are in the collections of the Metropolitan Museum of Art, New York; the Museum of Modern Art, New York; the National Gallery of Art, Washington, DC; the San Francisco Museum of Modern Art; and the Tate Gallery, London; among others. His work is the subject of numerous monographs. Sugimoto received the Medal of Honor from the National Arts Club in Photography; the Royal Photographic Society Centenary Medal; the Isamu Noguchi Prize; he is an Officer of the Order of Arts and Letters in France; he received the Praemium Imperiale in painting; the Photo España award; and the Hasselblad Foundation International Prize in Photography, among others.