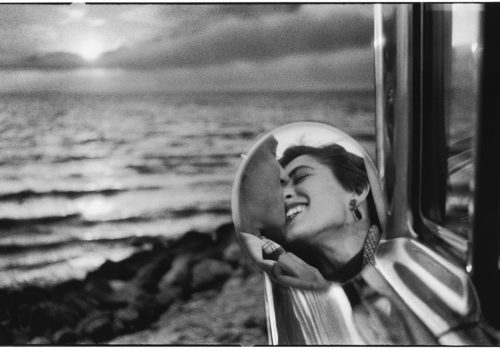 The “Found Not Lost” exhibition dedicated to the American photographer Elliott Erwitt offers the meeting of two ways of looking that the artist knew how to bring to the world.
First, that of the genius reporter from the Magnum photos Agency, whose audacious photographs humorously highlight the absurdity of the human condition.
On the other hand, that of a man in the latter stage of his life who decides, starting in 2018, to re-examine the photographs taken at the start of his career, far from the tumult of commissions.

By leaning again on this ocean of contact sheets, Elliott Erwitt was able to listen to the voice of the young photographer that he was. With this reexamination, it is his vision of the world that he questions.

If most of the artist’s photographs today have iconic status, it is because they possess this strength linked to the deep human commitment that emanates from them. It is a look that is interested in the way in which the living inhabit the world, with all the incongruity and seriousness that entails.

An attention that makes us think and understand the environment around us, with humor as the highlight.

Unpublished photographs, long awaited, have as for them, a very singular force which is due to the melancholy which emerges from them. The languor that prevails in these black and white scenes differs from the spectacular images of movie stars, the acerbic humor of dog series or even the clichés with Hollywood accents, with which we are accustomed to associate the artist.

They on the contrary of these images remained in the margins, seized during moments of breathing away from the frantic rhythm of the assignment.

Nevertheless, these now rehabilitated photographs exercise the same power of attraction on the viewer as the most famous shots.

Defining his own photographs as comments of the daily absurdity that plays out before our eyes, Elliott Erwitt has created through his work an incredible cartography of human emotions.

The key to this fascination may lie in the fact that these images tend towards this “elusive ideal” of which the artist speaks as a moment where everything comes together.

The “Found Not Lost” exhibition thus intends to create a dialogue between already iconic images, on which many eyes have focused, and previously unseen images.

Elliott Erwitt was born in Paris to Russian immigrant parents on July 26, 1928, and grew up in Milan. In 1939, faced with National Socialism, his family returned to Paris

to immigrate to New York a year later, then to Los Angeles in 1941.

At fifteen, while attending Hollywood High School, he found his first job in a commercial photo studio where he developed contact sheets for stars and starlets in the film industry.

In 1946, Erwitt returned to the East Coast – New York which has been his home port ever since. Here, he met Robert Capa, Edward Steichen and Roy Stryker who entrusted him with his first missions, thus becoming important mentors of the young photographer .

In 1949, he returned to Europe and spent a year traveling through France and Italy. Called up by the US Army in 1951, he obtained a position as a darkroom assistant in a stationed courier unit in Germany and France.

After his discharge from the army in 1953, Elliott Erwitt was invited to join Magnum Photos as a member by its founder Robert Capa.

In 1968, he became president of the prestigious agency for three terms. Erwitt worked for all the big names in the golden age of photojournalism, including Look, Life, Collier’s and Holiday, to name a few.

Journalistic assignments alternated with commercial work, but he always made time for his more personal photographs – his “cliches” as he likes to call them.

In the 1970s, he turned increasingly to moving images and produced several documentaries (Beauty Knows no Pain (1971); Red White and Blue Grass (1973)), as well as a series of comedies for the American television channel HBO in the 1980s. His work is represented in renowned collections around the world; solo exhibitions have been hosted by institutions such as MoMA New York, the Smithsonian, the Art Institute of Chicago, the Musée d’Art Moderne de la Ville de Paris and the Kunsthaus Zürich.

While actively working for magazines, industrial and advertising clients, Erwitt devotes all of his free time to creating books and exhibits of his work.