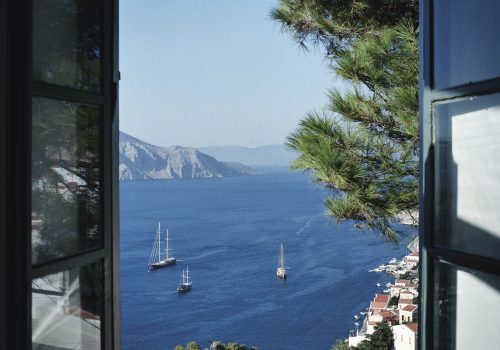 Synonymous with the art of travel since 1854, Louis Vuitton continues to add titles to its Fashion Eye collection. Each book evokes a city, a region or a country, seen through the eyes of a fashion photographer.

Each year, the Fashion Eye collection promise virtuous travelers, intrepid adventurers and standing dandies that experiencing a country is possible without setting  feet there. The book calls on imagination, offers a newborn gaze. And for melancholics, those who would have seen everything, it recalls the shores of yesteryear, the perfumes of a love asleep. “Like all travel, it’s personal, perhaps imagined” whispers François Halard. There resides the charm of this collection, year after year.  They pass and the appetite for discoveries deepens the hunger for reading.

In addition to major cities (Paris, New York, Shanghai, Berlin, Geneva…), the collection open roads, from the silk road to the Iranian unraveled landscapes. Like a refrain, the eye often comes to tickle the Mediterranean blazing sun, its reflections, its shadows, its silhouettes. It was Slim Aarons’ Côte d’Azur, Helmut Newton’s Monte Carlo, Osma Harvilahti’s Saint-Tropez. At times, Mistral, Tramontana and sea wind inflate their sails and up to the ports of the Aegean and Crete, a silent wind blows. To understand the Greek mystery, myths are erased or simply studied and the travel diaries look like advertising booklets.

Of photography on Greece one retains the ruins of Koudelka, the wanderings of Cartier-Bresson, the frivolity of Dimitris Yeros. In its very recent history, the noose was tightened into tragedy. Alkis Konstantinidis and Yannis Berhakis, among others, have told of painful journeys of new migrations. These mingle with the injunctions of reality, in its stormy crossings, with no destiny and unknown tomorrows. For Europe a Greek journey is a sole moment, a week with its islands to tick, its shores to walk along. In order to break its mystery, myths are erased or studied without being lived. And travel diaries look like advertising booklets. Some visions remain among the sea of washed out clichés, and boring glances. Hopefully, there are still captains with lost paths. François Halard counts among these lighthouses.

Is it necessary to see François Halard’s Greece as the most perilous adventure? Certainly not. His lumpy, satiny paper, in the wise hand of Patrick Rémy, moves away from the Odysseys. It is above all the choice of superimpositions, of recompositions between memories, fascinations, silent figures and evocations of fertile imaginations. If his Greece has this indelible color, the “blue of the boats, of the flag, and of course of the sea and the sky”. It has above all the hue of a soothed intimacy, marked by lascivious invitations and references of all kinds. In his paintings, Cy Twonbly wrote in capital letters the spectre of the Olympian gods. Athena, Apollo arose and struck the retina with the mystery of painting. François Halard takes over this reappearance of the past. He leaps from the book of perfect curves, serious and beautiful faces, perfect and violent torsos, tragedies and gods. Sculpture is seen as the memory of civilizations, it is inscribed in the atmospheres of its dread, of its perfection.

Thought as dazzling, these straight busts and marble figures form a contemplation of the intimate, and recalls in the same approach, the interiors of Marc Camille Chaimowicz. Chaimowicz’s installation Four Rooms (1984) was built, among other references, on the memory of the Villas of Pliny. For his friends, Pliny vigorously described, by forcing the line, imaginary villas. His words emanated a fascination for the images they evoked. Chaimowicz in his turn used this method, building his interiors with wallpaper, vivid paintings, reproductions of the Nabis or Matisse. It is born from this power of evocation a juxtaposition of times, colors, lights. The intimacy is enriched there. François Halard’s Greece takes up this same principle. A thread sewn there rewinds civilizations, fields of ruins (the sanctuary of Delphi, the theater of Epidaurus, the acropolis of Athens …) and views of interiors and still lifes.

On the latter are the Greek readings of Halard. On the seat of a church chair Birth of civilization in Greece by Christian Zervos. On a pile of books, like the foam of all these beams, of all this memory gathered, a catalog of Cy Twombly marries Greece Gods and Art by Alexander Liberman. These references decorate the work and deepen the only good job to be done in the eyes of the photographer: aesthete. However, they are sufficiently diffuse and discreet not to become pedantic. They are imprints, landmarks without masking the banner of the work. Its first quality, its greatest beauty, its simplicity: “light, is all! ».

With these calls to the open sea, the sea sun, the tiny vibrations of a bedroom, the remains of a heart drowned in memories, François Halard’s Greece forms one of the most successful works of the Fashion Eye collection Leafing through it brings, the strong impression of the eye, the joy to seize tiny things: the music of a light, the dance of a reflection, all the evanescence of a country. And its beauty strikes, remains and fades away. In full page, lost in the immensity of the blues, the photographs vibrate and fade away. It is the charm, of Greece, to return to the ruins, to a previous life, to the imaginary.