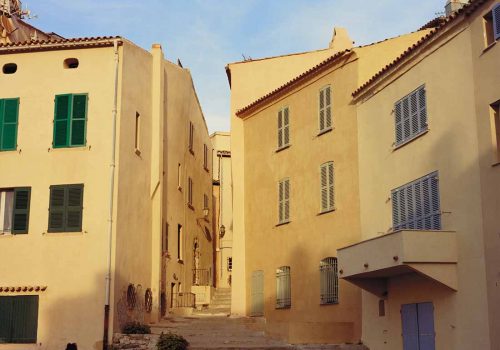 Inspired by the House’s heritage of travel, Louis Vuitton’s Fashion Eye collection evokes cities, regions or countries through the eyes of fashion photographers, from emerging talents to legendary photographers.

The Saint-Tropez of Osma Harvilahti is a Mediterranean village like the others. Once its seasonal sequins put in the clichés’ closet, it remains an intact shine, that of daily life at the seaside. A peaceful life, sweet, honored by the look of a simple heart.

It would have been so obvious to expose again the splendor, its bad taste and its admirers. Here, a sincere city is revealed. First in its outlines, its exteriors, its forms and its details. Things we do not see if we do not take the time. As a result, by the faces, the inhabitants, who, in this kind of village, are often called “figures”. The period chosen by the photographer is fthe key. While he ceaselessly trailed like a cat stretching, the end of summer, is, around the Mediterranean more than elsewhere, crossed by a form of melancholy. Something is freezing, better, it happens as a “crystallization”, emotional movement dear to Stendhal. It touches both the artist and the model, Saint-Tropez and all its actors, in life size. The choice of Osma Harvilahti is twofold: it allows him to play with unpredictable lights but also to capture the vulnerability of a village that becomes itself and exposes itself. There is indeed in Saint-Tropez a way of life, and more, a way of looking. As evidenced by the portraits of these inhabitants who contemplate, look far into the sea, the sun, and sometimes nothing at all. Just there to contemplate.

The look, therefore, image engine, and live creator. More than a photographer, the Finnish artist is also a composer. It must be said, it is not in the habit of the Tropezians to walk with an octopus on the head or a squash on the shoulder. These stagings, funny and yet authentic, are part of a rapprochement with the field. It must have taken a long time to consider the space to make these small compositions made of fruits, flowers or shells. From the culinary creations of Grand Chief to splashing sunscreen to Pollock, the recurrence of the stagings announces a kind of projection, as if Osma Harvilahti wanted to show spurts of his Saint-Tropez dream. Finally, the function of these pictures goes beyond aesthetics: in a vernacular sense, the objects that compose them unveil by delicate touches what life is made of. Totems that are built as offerings, tributes and thanks.

This is why we must also consider Osma Harvilahti as a documentarist. Accustomed to travel, inscribed in the process of revealing the beautiful and the sensitive wherever he goes, the photographer even claims the idea of ​​”cultural and aesthetic egalitarianism in his subjects”. And yet, he never falls into the pitfalls of relativism and jargon. The former sociology student simply uses his other link to the field. Like any work closest to an object of study, he manages to detach himself from prejudices and first impressions. Access is only through contact, immersion, total and indistinct.

Seeing something else does not mean becoming blind. If he manages to reveal another Saint-Tropez, the Finnish artist has not snubbed the key places of the usual fantasies. Once again, delicate treatment  establishes a movement in the service of the Beau: to make anonymous to become universal. His triptych Sénéquier, homage to the very French “café-croissant”, replace the mythical brasserie to the rank of corner bistro. There is also the Byblos or les Voiles that could have been anywhere else if the captions of the clichés did not betray them. And even when it comes to swimming pools or big hats, it is the step aside that prevails, the same step that allows to move away from bad judgments. Be that as it may, his last word will be about color.

Finally, the reflection of a yacht in the water of the port of Saint-Tropez serves as back cover. Ending ? Starting rather. Most of the time, this page announces the content of the book that is held in the hand, and more than the title, it is the back door that calls to enter. This is exactly what the reflection of this boat makes known. In all this photographic project of Osma Harvilahti, the same theme is distilled: to return the image. First there is Saint-Tropez and its limousines of bias, on the question of judgment. Then there are the shadows and reflections of the season in transfer. The compositions and approaches on the ability to make sense. A sweet tribute to painters for summer visitors. And finally, the reception, the welcoming, and the things that one has to give back, when one has received so much.

Director of the Allume-Feu publication