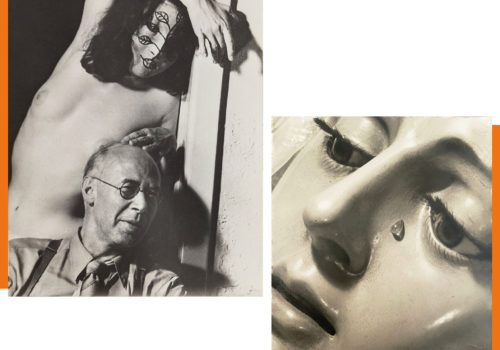 This is the ninth dialogue of the Ettore Molinario Collection. A dialogue between Man Ray and Henry Miller, and perhaps between Man Ray and his invisible tears. In homage to one of the most famous images of the great American photographer, which is so close to the faces of the ancient statues of the Holy Week in Seville, I invite you to follow us in the next appointments.
Ettore Molinario

Although it may seem strange, it is a good thing that Man Ray and Henry Miller did not meet in Paris in the years they both spent there. Strange because the photographer had arrived in the French capital in 1921, exactly a century ago, and the writer in 1928. Strange because they were the same age, they were Americans, both sons of a tailor, they were libertines, libertarians, atheists, individualists and they loved De Sade, even if Man Ray knew him better since, living in rue Campagne-Première, he was a neighbour of Maurice Heine, who was responsible for the true rediscovery of the Divine Marquis. But the strange game of coincidences continues because in 1934 Man Ray prints the collection Man Ray. Photographies 1920-1934 Paris, while in the same year Henry Miller publishes Tropic of Cancer in Paris for the editions of the Obelisk Press and in the first pages he writes: «Paris is the cradle of artificial births».

The artifice of fate wants Man Ray and Henry Miller to leave Paris for the United States in 1940, still ignoring each other and they only meet in Hollywood a few months later at Gilbert and Margaret Neiman’s house where Miller, penniless, found refuge. All together Man Ray and Juliet, his new partner, Gilbert, Margaret and Henry spend long evenings playing, drinking and dancing until dawn. But perhaps behind Margaret’s face, hidden by a painted papier-mâché mask, Man Ray imagines another face. Another body. Another love. Another city. And in this strange nostalgia, the portrait of Henry Miller and Margaret Neiman, that finally celebrates the meeting between the two men, actually becomes the self-portrait of Man Ray and of his secret desire to return to Paris and to all that he had experienced. Who knows if Man Ray remembered the tears he shed the day after Lee Miller’s farewell, those glass tears that he would photograph shortly after, those glass tears a breath away from the rimmel-smeared eyes? Because women must cry and suffer, the muse-women, the mystery-women, even the saint-women in the blasphemy of Sadian memory dear to every surrealist. Impossible to know if Man Ray had seen one of the statues parading in the Holy Week procession in Seville. What is certain is that the tears “see” better than the eyes.
Ettore Molinario
www.collezionemolinario.com