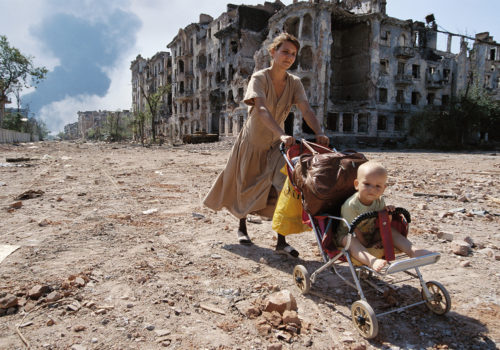 The watchmaker measures the course of time, the photographer stops it. It is as much his freedom as his constraint. Free to pause the world with one frame. Constrained by a technical framework from which he must break free in order to gaze at the expanse of the earth. Because, to exercise the most beautiful profession offered to men, there is a price to pay: that of bringing immense creative freedom to the service of the strict documentation of humanity. This is the essence of photojournalism. A wonderful goal. A challenge. In practice, the world is never black or white, but made up of shades of gray. With his fears can kill, the raw image hunter must reconcile two antagonistic realities: to love the world and to show it as it is. Look for the contrast, this opposition of two things, one of which brings out the other. But which one should one choose?

In 1985, I immortalized little Omeyra, a Colombian child trapped by a mudslide, which the rescuers could not release. She died soon, however, but not in front of my eyes. I only grasped life, before the tragedy. Two years later, I discovered Islamic fundamentalism deep in a valley near the road to Khost, Afghanistan. A certain Bin Laden, still unknown at the time, led the group which did not like foreigners, they left me without food, after a grueling crossing of the snow-capped mountains on foot in the middle of winter, very dangerous because I was lost along the Russian lines. I have no images to show, but I live with the souvenirs. In Belfast in 1988, during a commemoration in the Catholic cemetery of Milltown, a Protestant suddenly threw grenades at people in the middle of the graves. A ceremony of remembrance that turned into carnage. A certain human condition. For the fall of the Berlin Wall in 1989, I stood on on it, as a free man. I made pictures, my images go down in history, I am happy. I do the most beautiful job in the world in that moment. Then comes Somalia. In 1992, I discovered fear. First journalist to arrive in Baidoa, the epicenter of the famine. I crossed my black line, the one where madness and death take all. I shot very few images because I’m not there. My brain refused what my eyes saw. That’s the last straw for a photographer: a flagged censorship, the lens at half mast. Then in 1995 the Russian commandos in Chechnya, horror is human: any human being can turn into an animal. I now know what the verb to survive means. I try to work with only seven slide films available, I document as best as I can because everything happens at night, I do my job and it is not always the most beautiful in the world.

Witnessing and questioning oneself, questioning and jostling the public, this has been my role for forty years. With a clear line of conduct: stick to the facts, while respecting the dignity of the people photographed. Because they are the ones who make the images that history books retain. Often dealing with absurdity, which is far from obvious. Today, the situation has not changed much, despite advanced technologies. We must always marry the objective excellence of the shot with the subjectivity of the point of view. And above all keep for oneself the idea that the best image has not yet been achieved. You have to look for it. And if everyone agrees that time is getting faster these days, this is a good reason for the photographer to show that it can still be frozen. And stop the image.

Three years ago, I visited my daughter Cerise who live in Berlin. At the Helmut Newton Foundation bookstore, I bought her a Saul Leiter journal. Last year she had the idea of ​​making a journal like this for my 40 years of photography. Following this production, I contacted Jean François Leroy from “Visa pour l’image”  festival of photojournalism in Perpignan, and asked him if he could be interested. He organized for me a magnificent exhibition with 54 images. The results: 23 interviews in the major medias, an incredible crowd of visitors, attentive and passionate.

The autographed journal is on sale directly for € 20  in Paris