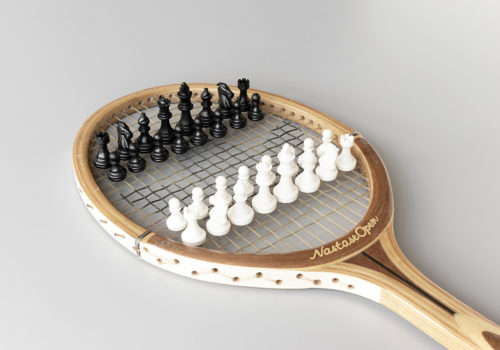 The exhibition reveals the power of the imagination. Each idea, formulated from conceptualization and minimalism, is presented as a colloquium between work and viewer. A photographic exhibition that reveals the evolution of the photographer, a walk through the artistic creation of an alternative universe. Objects are everyday, inanimate elements that, through the sieve of surrealism and unreality, are stripped of their own nature, to transform themselves and claim other realities. García de Marina’s manipulation of the object is a “Jonbar point”, which allows the creation of an alternative historical setting, a uchronic work, contemplated through the gaze and deciphered in the mind. The relationships between the elements are produced through combinations, in most cases random and distant in space, with different codes, which converge to support each of the possible interpretations.

Successor to the Surrealist photographic tradition, Spanish artist García de Marina offers the viewer an alternative vision of reality. His creative method can be tentatively termed as uchrony, implying an approach to the world of physical objects that ignores their original functions. The artist manipulates his props like a child playing with pebbles, combining them in an ingenious way to create something new.

Our overindustrialised daily lives are filled to the brink with all kinds of material objects, teeming with coffeemakers, spoons, brooms, brushes, dishes, and other blessings of civilisation. Looking at García de Marina’s photographs, we instantly recognise these utensils, even if we have never held them in our hands. They all seem to be engaged in something of a ‘naughtiness feast’: jettisoning their ordinary function, they literally couple with each other, giving birth to chimeric imagery. The artist conjures up a world of animate objects that try to appear not what they are, adding up to form mysterious messages.

García de Marina describes his art practice as visual poetry. Indeed, the poetic trope of metaphor is the key artistic device here. Nevertheless, it is not always easy to read the meanings behind these visual metaphors: at times they seem absurd or even accidental. However, such is the poetry of things, celebrated by Comte de Lautréamont who famously found beauty in ‘the chance meeting, on a dissecting table, of a sewing machine and an umbrella.’ The ability to see meaning in the absurd and accidental is what makes a person an artist. García de Marina invites us to join him in this whimsical game.

García de Marina was born in Gijón (Spain) in 1975. He emerged thru a deep transformation in 2010. A dormant passion for photography crossed the barriers of intimacy and he started a sparkling career characterized by photographic reflection, in contrast with the author’s restless nature. In less than a year García de Marina gave in to a devotion for photography, unveiled his unusual photographic gaze in social networking sites, and presented his work in various exhibitions.

Since 2011 he uses objects as a means of expression. He is interested in their symbolism, that random connection of elements that a priori lack of relation, condensation or essentiality, in order to translate them into an emotional burden. His work revolves around intuition and ideas, surrealism, and the world of the subconscious and dreams.

His work is deeply irreverent with reality, seeking to transform and stamp objects with new identities, challenging the obvious, and paying attention to the greatness of everyday life. The bareness of his photography endows objects with a leading role, while they are stripped of their essence to be reinvented. He seeks to give emotion to a piece of cutlery, to a match, or to tell a story, his own story, with an eggshell.

The artist never gives his works a title, leaving them in a free interpretation, thus provoking a dialogue between his work and the spectator, and let the idea or story end in the mind of the observer; neither does he perform any photographic manipulation on the images. Instead, he transforms the objects creating scenes and looks for the best perspective to photograph them.

In 2021 the postal service of  «Correos and Telégrafos» of Spain puts into circulation 162.000 stamps with a work by the author. It would be the first stamp in the world dedicated to «Postal Art».