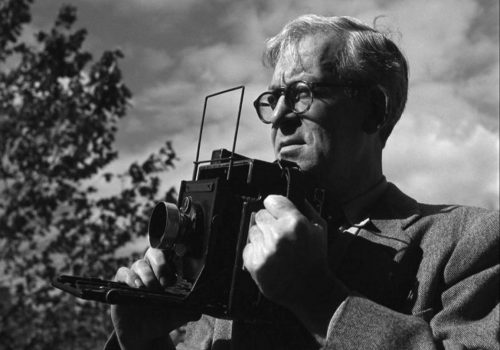 Under the piercing gaze of Colette, tutelary figure of the Richard-Anacréon Museum of Modern Art in Granville and the auspices of Christian Dior, the child of the country, opens the exhibition devoted to Émile Savitry, painter and photographer of the 1930s to 1950s Paris which takes place there until November 1, 2020.

The Grande Chaumière Painting Academy, the Dome cafes, the Rotunda and the Dome, artists’ studios where models posed, boulevard Edgar Quinet and the jazz clubs; it is in the heart of Montparnasse that Emile Savitry began his career as a painter, developed that of photographer, frequented his friends sculptors, painters, poets, musicians, it is there that this talented jack-of-all-trades who “had more than one string to his bow “lived all his life.

His work rekindles “the hot hours of Montparnasse”, this artistic and friendly cultural effervescence which took root in the smoky atmosphere of the cafes at the Vavin crossroads. We see there Alberto Giacometti, Victor Brauner, Anton Prinner whom Savitry photographed in the privacy of their art studio, Samuel Granowski whom he photographed at the bar of the Rotunde, Jacques Prévert whom he met with his brother Pierre at the time of the October group after his return from a long journey in Polynesia. He had fled there after the too quickly acquired success which frightened him at the time of his first painting exhibition at the Zborowski gallery in 1929.

It was on his return from the Pacific Islands that he met Django Reinhardt in the port of Toulon, offering food and lodging to the still unknown Gypsy guitarist and revealing the music of Duke Ellington and Louis Armstrong to him. The Reinhardt family will soon join Savitry in Paris and find refuge for some time in the photographer’s beautiful apartment, boulevard Edgar Quinet, touching photos bear witness to this.

This exhibition follows the journey of a photographer close to the surrealists where bright lights illuminate mask faces, the little people of Pigalle crossed the jazzy youth of the cellars of Saint-Germain-des-Prés, the streets of the capital take on the appearance of movie sets.

This black and white cinema magnified by Marcel Carné and Jacques Prévert whom Savitry will accompany on the film shooting, bringing out the “dazzling clarity” of the Doors of the Night and the melancholic beauty of Anouk Aimée in  La Fleur de l’âge, cursed and unfinished film, made in Belle-Ile-en-Mer in 1947, the remaining photographs are the only visual testimony to this day, the reels having mysteriously disappeared.

It imbues us with this poetic realism that Savitry shared with Brassaï, Willy Ronis and Robert Doisneau with whom he teamed up within the Rapho agency. It reminds us with each silhouette of these nudes with harmonious curves that the photographer Savitry had never abandoned the themes dear to the painter he remained.

It reminds us that the concerns of the artists of that time were linked to the history of their time so the Spanish war is invited into this set. Savitry-reporter testifies of this event, at the time of the Retirada, for the magazine Regards. Pablo Neruda, back from Spain after Franco’s victory, pictured here at the Coupole in the company of Paul Grimault and a few Latin American friends was one of the witnesses of Republican Spain that he had always supported.

It also points out that at that time photographers rarely made a living from their art but worked regularly for the abundant illustrated press to support themselves. That was the case for Savitry, who took fashion photos, was studio manager of Vogue magazine and collaborated with Le Jardin des Modes. He immortalized Christian Dior at his Parisian home in 1947, sketching new creations with lead pencil. For several collections of the great French designer he lead the models in the streets of the Capital to capture the movement, magnify the lines and give them life, as did later immense photographers like Richard Avedon, William Klein …

In a playful tone, it ends with Charlie Chaplin’s takeoff and the puppets of Yves Joly, an elegant and light reverence from a discreet photographer “too alive to want to be an artist” as Claude Roy wrote.

Journalist, responsible of the photo department of the newspaper Le Monde for many years, upon leaving the daily, she chose to undertake research and promotion of the work of forgotten photographers through exhibitions and books. Émile Savitry (1903-1967), whose photographic collection is kept in the family collection, is the most successful example. This first surrealist artist who became a photographer in the 1930s, Brassai’s traveling companion, Willy Ronis, Robert Doisneau, died too soon to know the fame that the 1970s had for humanist photography.

produced under the direction of Brigitte Richart, curator of the Granville museums