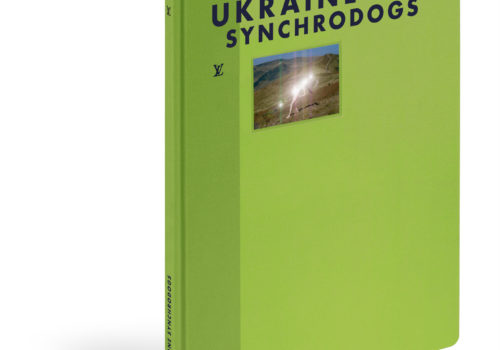 Synonymous with the art of travel since 1854, Louis Vuitton continues to add titles to its “Fashion Eye” collection. Each book evokes a city, a region or a country, seen through the eyes of a photographer. With Ukraine, a composition by the duo Synchrodogs, the book opens a page on an unexpected journey.

The charm of a journey is to provoke surprise. During the holidays, time stops, it is suspended, halfway between rest and voluntary abnegation. While traveling, the world awakens, becoming the land of virgin discoveries. The attention gets excited by the details of everyday life, the noise of the world, the ways of others, some oddities we note for ourselves. However, today, the unexpected  is being prepared. It is taught at a very young age by adventure book, extended by documentaries, channeled into tours, safaris and tourist routes. Adventure remains a framework, a destination at half risk. Madness now returns to those who will take the back roads; only a shrugs of the shoulders for those who will take a flight to the former communist blocks, rather than sailing from souks to gondolas, from Phuket to Lima, from palm groves to vertical cities.

Ukraine is not a destination known to Europeans, rather frequented by Russians, Moldavians, Belorussians or Poles. It remains for the post-Soviet period a land of colorful revolutions and recent conflicts, the ignorance of its landscapes replaced by media images. By opening up to a thick, beautiful, but inextricably unknown land, the Fashion Eye collection from the Louis Vuitton Editions extends a step aside. It inscribes the book in the lineage of inaccessible lands, from Sølve Sundsbo’s British Columbia to the luminous trenches of Cretto di Burri, magnified by Oliviero Toscani. The Fashion Eye inscribes their book in an immediate mystery, whether the country is distant and inaccessible, or simply unknown. And by entrusting  Ukraine to Tania Shcheglova and Roman Noven – a duo from the country using the name Synchrodogs  the mystery thickens.

Both are self-taught. They did not follow any form of artistic education and their artistic influences remained limited. They live in Ivano-Frankivsk, Tania Shcheglova’s hometown, 600 km away from Kiev and its cultural broth, favoring the proximity to the Carpathian reserve, “with friendly people, near the mountains, nature and an airport”. Both of them think of art out of a national context. They do not refer to the country’s photographic masters (Boris Mikhailov, Evgueni Pavlov), they do not quote contemporary photographers, and voluntarily extract themselves from the artistic world, its fashions and circuits, in order to benefit from their experimentation. In this, they join Dubuffet’s adage, “art requires no teaching” and their curiosity for their immediate environment, the spongy and bouncy plains of the Carpathians, the granitic forests, this land of furrows, becomes the land of the unknowable. Moreover, the reader is invited to the same ignorance. Ukraine is only partially shown through the prism of the Carpathians, and from this prism, the often conceptual compositions, performances, nude  plays are in phase with nature, differing to offer a true Ukrainian breviary. The discovery is only partial, and from these two storytellers, one must retain the inventive handicraft carefully composing a dream.

Above all, knowing Ukraine means going along the same roads. Domestic journeys often offer more poignant beauties than great excursions. One thinks of the insatiable love of Pierre Bergougnioux for the Haute-Corrèze, the droughts of the country of Giono, the eternal flatness of Etel Adnan. To so many others. It is a well-known, verified adage. For Roman Noven and Tania Shcheglova, it comes back to criss-crossing by motorcycle the canyons dug by the Dniester and its tributaries, to cover a land that was “once wild” and which since then has frequently been mishandled, even soiled. Saying what the Carpathians are and will become and “making art” are intertwined together, in an informal learning of everyday life.

Their artistic deftness is itself conditioned by a form of awakening to the fragility of the Carpathian reserve. “Over this month of traveling, we came across a lot of controversial situations: learning how thousands of trees are being lumbered and sold by locals weekly, all illegally, ; seeing mounted and stuffed animals in every mountain restaurant, hotel or inn and never spotting a single live animal in the forest; stomping out a campfire left by irresponsable hikers who thought the fire would die out on its own at a site in a valley. Witnessing these and other intrusions into nature, we began to think about how much we, like all living entity,  alter our environment and are altered by it”, they told editor Patrick Rémy.

The ecological incentive, the imperative to safeguard and alert, is not immediately readable in their photographs. It is more likely a triggering element, somehow an implicit discourse. Their work is above all an arrangement with nature and the body. It takes on a profoundly theatrical dimension, playing on carnivalesque, make-up, even the simple and pure concealment of silhouettes in their immediate environment. Thus, the body sometimes hugs the rock or the sand, coiling there like a natural body in gestation. It is the extension of an element. The body hides behind a branch and becomes the trunk, the roots. It is then the heart. In this, their staging joins the bronze arms and other limbs viscerally attached to the trunks of Giuseppe Penone. Sometimes, these stagings decay, exceed, discord with the environment. The performance takes over. The body dressed in floral bouquets, shimmering with pieces, colored spots, suddenly transforms itself into strings, spotted, scratched, enlarged, stretched and melted; without being able to detect whether these are appropriations of objects and motifs found in nature, brought back forms clashing with the natural by their irruption, or more simply absurd elements giving the photographs an absurd character.

From the body postures emerges the impression of a play between the earth and the body, between the inorganic existing (rock, meadows, and any other natural element) and the body. In its natural element, the imprint of the body remains ephemeral. The landscape has no vocation to record it, which distances the duo from a contingent of artists specific to Land Art. Only photography keeps the memory of their works, of their actions. But there is nevertheless a proximity with the artistic movement of the 1960s and 1970s. The medium is the land itself, magnified by distorted choreographies. There is an obvious reciprocal relationship between the artists’ bodies and the earth. Their concrete, albeit ephemeral, engagement in the Carpathian site opens up a “way of seeing” (Thiberghien) the natural reserve.

The comparison with Land Art is however limited: their works cannot include the spectator, unlike Land Art’s achievements, such as Smithson’s Spiral Jetty, or Michelle Stuart’s Solstices. The result remains strictly photographic, the latter being in essence past and accomplished, and one would then have to speak of more or less disordered actions, of choreographies remaining in a state of mystery, or of a simple ode to the fragile beauty of the bodies, of the nature of the Carpathians. The plot thickens from page to page, making this opus by Éditions Louis Vuitton a powerful, intoxicating book, as carnal as it is untranslatable; a book that leave marks, that is turned and turned over between its fingers, opened again, torn from this curiosity, from the desire to resolve the ambivalent form of this art offered by Synchrodogs.